I received this book for free from Blog Tour in exchange for an honest review. This does not affect my opinion of the book or the content of my review.

A handful of survivors claw out a life amid the ruins of the world, all the while fighting the zombie hordes.

In Northern New York State, three uncommon allies lead one of these bands in this epic struggle as they learn both the strengths and weaknesses of their enemies… and of themselves.

Pushed to their limits and holed up on a remote lake island, life has taken on a new normality. That is until winter arrives and all hell will freeze over. For it is then that the open waters of the lake, the only barrier against the unrelenting dead, will freeze. And the monsters will come. By the thousands…

We at Little Read Riding Hood would like everyone to welcome David Monette as he tours his first novel The Zombie Axiom.

That’s a good place to start, huh? Alright, so… I am a father of two lovely kids, a little boy and a little girl, I’m married to a wonderful lady, I’ve got a dog named Krash, and I like to write and paint. The painting part is something I’ve done for years. Since I graduated from college I’ve been freelancing as an illustrator, painting and drawing artwork for clients. The writing part is new. I wrote my first novel, The Zombie Axiom a few years ago, found an agent, and eventually wound up signing a three book contract with Severed Press for the trilogy.

When I was attending the University of Hartford for my MFA a few years back, I took the advice of a great professor and artist, a guy called Murray Tinkelman, who read my papers and said that I was a really good writer. He, and another great artist, Vincent Di Fate, encouraged me to combine my writing potential with my skills as an illustrator to chart my own creative path. Since I respected the opinion of these guys so much, and since writing was something that was fun for me to do, I started writing The Zombie Axiom.

I would probably be continuing as an illustrator.

I would, without a doubt, continue both writing and painting.

Thank you for David Monette for answering some questions, and we wish you the best with The Zombie Axiom.

I liked The Zombie Axiom. I liked it because it is not the same as every other zombie novel out there.  It is as dark, and horrorish as other zombie novels but most zombie stories have a disease or toxin that starts the whole zombie apocalypse.  You know, one guy gets bitten, he bites someone, et al et al.  Now this book starts with a Meteor shower which hits major cities first therefore turning those living in closer proximity to each other, versus the main characters who live in a former military town in the middle of no where.  This middle of nowhere actually saves them from what is about to start.  Monette does a really good job at defining the characters and making them a part of the reader.

For me my favorite characters are Derek and Virgil.  I do not like them because of what they do persay, but I like them because of how David portrayed them.  I like how he made them human and no just characters to be moved as pieces.  His take on zombies, and writing in general is different than other many other authors I know.  The thing is that this has so much more than the summary.  Most summaries give you a good overview of what happens in the book, this one just leaves you completely unaware and surprised by what happens.

All About David Monette 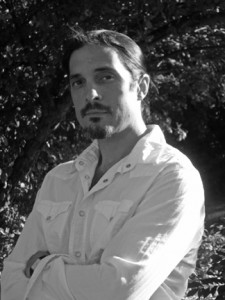 David Monette functions as an author and illustrator from his home in Northern New York State. His highly detailed fantasy and science fiction artwork has appeared on many books, magazines, board games, and collectible cards. While receiving his MFA in illustration, his instructors reviewed his written work and strongly suggested that he combine his writing ability with his talent as an illustrator to chart his own path. Hence, “The Zombie Axiom” was born, a compelling, terrifying story sprinkled with amazing black and white illustrations from start to finish.

3 Responses to “Interview and Review: The Zombie Axiom by David Monette”