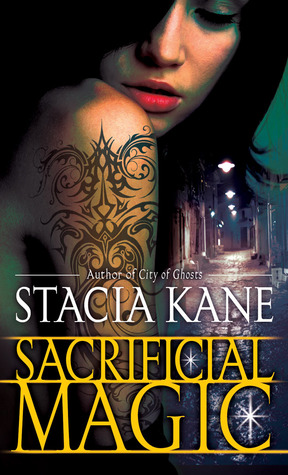 READING, WRITING, AND RAISING THE DEAD

When Chess Putnam is ordered by an infamous crime boss—who also happens to be her drug dealer—to use her powers as a witch to solve a grisly murder involving dark magic, she knows she must rise to the challenge. Adding to the intensity: Chess’s boyfriend, Terrible, doesn’t trust her, and Lex, the son of a rival crime lord, is trying to reignite the sparks between him and Chess.

Plus there’s the little matter of Chess’s real job as a ghost hunter for the Church of Real Truth, investigating reports of a haunting at a school in the heart of Downside. Someone seems to be taking a crash course in summoning the dead—and if Chess doesn’t watch her back, she may soon be joining their ranks.

As Chess is drawn into a shadowy world of twisted secrets and dark violence, it soon becomes clear that she’s not going to emerge from its depths without making the ultimate sacrifice.

Sacrificial Magic, by Stacia Kane, was delivered to my Kindle at midnight on Tuesday, and was finished by 11pm of the same day. And yes I had to work an 8 hour shift, and I even slept some in there. Probably not as much as I needed, but I definitely had better things to do/read.

Sacrificial Magic is the 4th book in the “Downside” series. It picks up not long, maybe a month, after the end of City of Ghosts, where the heroine, Chess Putnam, and the hero, Terrible, FINALLY get together. Back to that in a minute … Chess is a “Churchwitch” for The Church of Real Truth, who saved the world in 1997 when the ghosts of all the dead rose up, because of a planetary alignment or something (not 100% sure, maybe we will find out more in the future?) by banishing them all to The City of Eternity, or just The City, where spirits go when a person dies.

Chess works as a Debunker, which basically means she investigates hauntings and determines if they are real. Since The Church promised to protect the people from the murderous ghosts, if the haunting is real the people living there get a nice fat check and Chess banishes the ghosts. If the haunting is fakes, the people get arrested for trying to defraud The Church and Chess gets a nice bonus, for being so through in her investigation.

Now, what she does with that money is buy drugs. Lots and lots of drugs. Which to be honest, I thought this would be a big turn-off for me when I first started reading this series. But Stacia writes about the drug use in such a way that it makes it real, yet not appealing. It is just a fact of life for Chess. She knows it isn’t good for her, but that is the only way she can cope with the ghosts of her past (pun intended!).

In Sacrificial Magic, she is assigned a school haunting, where the debunker previously assigned ran off. Of course this case just so happens to be in her ex-whatever he is, and rival drug lord’s territory. Which is extra bad for her, because, as I said earlier, Terrible and her FINALLY got together. And he is the enforcer for the drug lord on her side of town. Which makes things even more complicated for Chess, not that she doesn’t F-things up on a regular basis on her own.

I can’t pick just one thing that makes me love this whole series as much as I do. Stacia creates such a vibrant world, even though, and maybe especially because, it is full of filth and horrible people doing horrible things to themselves and each other. None of her characters have the “problem”of being too perfect, or too beautiful, or too talented, or whatever B.S. problems other authors seem to think are real. I mean come on, the hero’s name IS Terrible! And no, it is not a nick name, it is his name.

And he is not pretty … far from it. However, I am so madly in love with him it (almost) sickens me. He is wonderful. And I cannot do him justice by writing about him myself. You will just have to go meet him for yourself.

And the language … Stacia has her own dialect for the characters who live in the part of town known as Downside. It stays consistent through the whole series, and I have found myself starting to think in “Downspeak”!

Ok, really now, i should be talking about Sacrifical Magic specifically, but the whole series is SO GOOD that it is hard for me to talk about an individual book! There were definitely more times in this book that I was yelling at Chess, because she has so much self-doubt that she keeps screwing things up! At one point I had to put the book down and walk away; a character in a book was making me that mad. But seriously, if you don’t care about the characters, and the decisions they are making, then the author isn’t doing his or her job. I care so much about ALL of the characters in here, that their happiness is mine, their sorrow is mine as well. And believe you me, there is plenty of sorrow and pain to go around in Downside.

But that’s ultimately what makes this series wonderful. The good, the bad, and the Terrible. ♥

9 Responses to “Review of Sacrificial Magic by Stacia Kane”