by Jennifer L. Armentrout
Also in this series: ,

we have the brand new trailer for you! 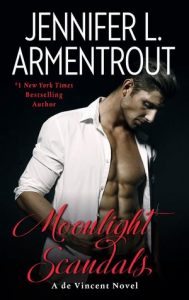 Even a ghost hunter like Rosie Herpin couldn’t have foreseen the fateful meeting between two mourners that has brought her so intimately close to the notorious and seductive Devlin de Vincent. Everyone in New Orleans knows he’s heir to a dark family curse that both frightens and enthralls. To the locals, Devlin is the devil. To Rosie, he’s a man who’s stoking her wildest fantasies. When a brutal attack on her friend is linked to the de Vincents, he becomes a mystery she may be risking her life to solve.

Devlin knows what he wants from this sexy and adventurous woman. But what does Rosie want from him? It’s a question that becomes more pressing—and more dangerous—when he suspects her of prying into the shadows of his past.

Now, the legends surrounding the de Vincents may not be myths at all. But if she’s to discover the truth, she must follow them straight into the arms of the man she can’t resist—the handsome devil himself