I received this book for free from Blog Tour in exchange for an honest review. This does not affect my opinion of the book or the content of my review. 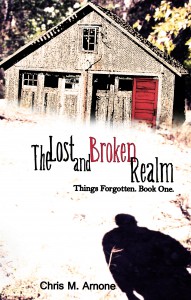 Gabriel Drake had royally fouled up his life. Before his wife died, he was wealthy, respected, and loved. He pissed away the small fortune he and his wife built, drove away his friends, alienated his family, and even took a few precarious steps on the wrong side of the law. He lost his way. The world had forgotten the man he was, and then a head-on collision between his Jeep and a tree changed everything.

Death would have been easier. Instead, he’s woken up in a strange place where all the lost and forgotten things and people of our world go to rest. The laws of physics seem to be driven more by magic than logic. Cats fly and talk into his mind. He’s in a place where real power has been trampled under the foot of a maniacal emperor, and Gabriel alone has the power to free these forgotten people from the emperor’s iron grip. Which will Gabriel save: these lost and broken people, or his own shattered life?

As with many debut authors and their stories, Arnone has some wonderful and some less than stellar things about his book The Lost And Broken Realm. Mostly the story was great and the execution that left me wanting sometimes, but nothing that should deter you from reading the story.

Like the main character, Gabirel Drake, I was confused through a good portion of the story – but it was a pleasant confusion. As a reader you discover things right along with Drake, and so there isn’t much of that “NO! Don’t do that! That person is bad!” screaming I usually do in story. Although I didn’t get that sense of urgency that the characters apparently felt. They were being chased through most of the story after all, but seemed to stroll casually on their way.

I would be remiss if I didn’t also mention there were several minor editing issues. Nothing major, but a few places where a word was missing, or the previous sentence not matching up with the next. For example, there is one scene where Gabriel is being introduced to several people, and at first he is told “To your right you will meet …” After that introduction the next is “And on her left is …” Well, they are sitting in a circle, so Gabriel would be to her left. But nothing that really changed the story.

One thing I REALLY LIKED though – was the ending. I LOVED the way Arnone left things with us and the characters. It is a satisfying ending to Gabriel’s adventure yet leaves you as the reader looking forward to what will happen next.

Write What You (Don’t) Know

One of the most hotly debated topics among fiction writers is a simple piece of advice originating from Mark Twain, “Write what you know.”

On the one hand, there’s a level of knowledge and understanding when you write what you know. Mr. Twain wrote about life on the Mississippi River, something with which he was intimately familiar. His novels have stood the test of time as snapshots of the American past, warts and all. His writing was bold and fearless, and so his advice has stayed with us for more than a century. Other authors have had success writing what they know. Michael Crichton based the television show, ER, off his own experiences as a doctor. Ian Fleming was a Naval Intelligence Officer before he created James Bond.

On the other hand, if writers only wrote about what they knew, there would be no science fiction, no fantasy, no paranormal anything. Neither Charlaine Harris nor Stephanie Meyer has ever met a vampire. J.K. Rowling has never levitated anything with the swish and flick of a wand. George R. R. Martin has never seen a dragon or a 700-foot wall of ice.

There is something that all successful authors know, however. Authors know people. Have you ever wondered why some authors write great, diverse, dynamic characters and others tend to fill their books with stereotypes? Great authors are empathetic; they’re good at putting themselves in someone else’s shoes. They don’t judge their characters, not even their most vile antagonists. The best characters are the ones that follow their principles, live their lives by their own codes, and react to situations in consistent ways. No matter how outlandish the fiction, people that don’t behave like they would in the real world can ruin any story.

My own novel, The Lost and Broken Realm, is set in a fantastical world full of magic, mythical creatures, and the broken remnants of places long forgotten to us. I don’t know these things personally. I’ve never met a manticore or a griffin. I’ve never seen Babylon or El Dorado. But, like most adults, I know loss. Loss is something quite familiar to both of my main characters: Gabriel and Reece. I know love. I know friendship. These things are in my book along with magical words and clockwork butlers.

So perhaps there’s a middle ground between writing what you know and putting to words concepts that can only come from imagination. Anne Rice never met a vampire, but her Vampire Chronicles were mostly set in New Orleans, a town with which she is intimately familiar. Jim Butcher has never made a deal with a Fae queen, but he works his own knowledge of archaic weapons and martial arts into The Dresden Files.

So write what you know and write what you don’t know. Spin them around together and mix them freely. Both are amazing adventures that go together like vampires and Southern belles.

Chris grew up in Independence, MO. He attended college at Truman State University where he pursued his loves of theater, music, and the written word. Now, he makes his home in Kansas City, MO with his wife Christy and their four cats.

Aside from writing feverishly, he is an avid supporter of the Kansas City burlesque, performance, and arts communities. He is an occasional emcee, outspoken supporter of LGBTQ equality, and King of the Nerds. No, you didn’t vote for him; that’s why he’s king, not president.