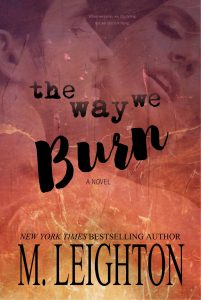 I knew from the moment Noah Williamson walked into the diner that he was haunted—deeply haunted—but I couldn’t resist the lure of him. He was gorgeous and fascinating and mysterious, and like a delicate moth to a brilliant blue flame, I was drawn to him. Drawn to his fire.

But if I’d known about his job, about what happened to his wife, I’d have run the other way. Before I got caught up in the red-hot blaze of his life. Before everything in my world got burned to the ground.

It’s too late to run now. I hesitated and that was it. I fell. I fell for him before I knew there was danger in loving him.

Noah once told me that this is the way we burn—together or not at all. At the time, I didn’t know what that meant. 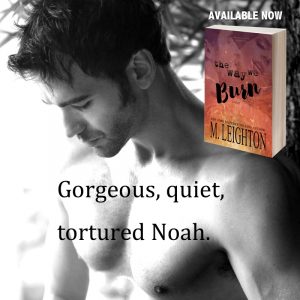 Hefting the loaded tray up onto my shoulder and balancing it on my palm, I push through the stainless steel doors that lead out of the kitchen.  As usual, my eyes scan my section, checking to see if anyone else has made their way to one of my booths.

The tray tips precariously to the left when I see him.

At least that’s the way he seems to me—tortured.  But all I really know for sure is his first name. That’s all any of us know about him.  That and the fact that he comes in every day at seven o’clock sharp and slides into the booth in the back corner. He’s always alone and he always orders the same thing—plate of fries, tap water, no lemon.  Other than that, we know nothing about him.

The other girls who work here have tried to learn more, of course. I mean, a man that gorgeous, that quiet and that dangerous-looking is like catnip for them.  Well, he’s catnip for all women really.  Even me, and that’s saying a lot.  I make a point not to notice men, especially gorgeous/dangerous/catnip ones, but Noah even got my attention.

And Noah has ghosts.  That much I can tell. This man has seen things.  Things that don’t go away.  He’s seen things that echo and moan and rattle through your soul long after the nightmares stop.  It’s all right there in his eyes, eyes that are like a cemetery on the most beautiful day of the year—warm and bright and safe on the surface, but full of monsters and ghosts that lie in wait, just beneath the green, green grass and the well-kept flowers.

It’s those ghosts that bring my heart to his table, right along with my smile, when I change my trajectory so that I can walk by his booth. I don’t even care that I’m still holding a tray full of food that belongs to someone else.

“What are you drinking tonight?  I can grab it before I come back to get your order. ”

He lifts those somber eyes up to mine and I see his mouth curve the tiniest bit at the corners. I bet a smile from those lips would turn this place upside down.

I’m sure it would turn me upside down.  This man is as devastating as he is quiet and solemn and broken.  If he actually smiled…

I’ve never seen one, though—a smile. Not from him.  Far as I know, none of the other girls have either. Noah just doesn’t smile. I get the distinct impression that he doesn’t have much to smile about. That’s why I never mind that he always sits in my section.  That’s why I don’t complain, even though he never orders much and always stays longer than most customers, which cuts way down on my tips.  I’m always happy to see him because I get the feeling that coming here may be the only time he gets to see a friendly face.  And as crazy as it sounds, I feel like maybe I can give him something to ease that great pain of his, even if it’s just a smile.

But it hasn’t happened yet. By the looks of it, I don’t think I’ve helped evict one single ghost. The pain is still there when I look into those sky-blue eyes of his. It’s raw and bleeding and barely disguised.

I nod.  I’m not the least bit surprised by his order.  This is the way our interactions always start—tap water, no lemon. “You got it.”

I shoot him another smile before I hurry off to my other table, already hopelessly distracted.  It happens this way every night. Once Noah arrives, all my focus shifts to him.  I can’t help it.  No one can, really. Noah sits in the back booth where it’s a touch darker, yes, but there might as well be a spotlight on him.  I doubt he can go anywhere without being noticed.

I glance at faces as I weave my way between tables.  Most eyes, belonging to both males and females, are flickering toward Noah, like they don’t want to look, but can’t quite help themselves.  He’s not only a striking man, but he’s mysterious as well.  There’s just something about him…  Even the men aren’t immune.  Maybe they feel threatened. Maybe they like to keep an eye on him because he has that dark, unpredictable, loose-cannon air about him. I don’t know, but it happens this way every night—Noah comes in, people take notice.

I finish setting food in front of my customers at table four then head back to the kitchen.  I’m filling a large glass with tap water when Tilly walks in.  She bumps her shapely hip against mine and purrs into my ear.  “Noah’s here.  You need some help?”

My grin is automatic.  “No, I only have him and two other tables.”

“I know, but that seems like an awful lot for a tiny little thing like you. Maybe I should take one off your hands,” she teases with a white, white smile that shows off the red, red, red of her lips.

I’m topping off the glass when she pokes her head back through the door and nods at it. “That his?”

I nod in return.

She snatches the water from my hand, kisses the air in front of my face and disappears, leaving me to shake my head at the cloud of cheap perfume left in her wake.

She does this often.  Tilly has tried and tried to bait Noah. She’s flirted, she’s insulted, she’s spilled something on him, she’s dropped things in front of him.  She’s done everything, including directly propositioning him, but she’s never gotten much of a response.  He’s always been kind, but kindly not interested, and for a woman like Tilly, with her big blonde hair and big fake boobs, disinterest is not something she’s accustomed to.  That’s why she refuses to go down without a fight.

So she keeps trying.

And I keep shaking my head.

I guess she’ll learn eventually.  Noah’s something different.  She just hasn’t figured that out yet. 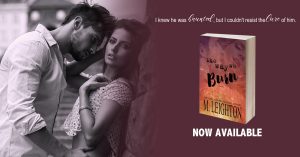 Tragedy can catapult your life in ways that you never could have predicted. When that tragedy results in the loss of a child, no one can imagine the pain and despair that results from that event. Noah Williamson knows the pain of loss. In fact – he has experienced more than his fair share. How he carries on will the deciding factor on how his future will be impacted from the past.

Loss has led Noah to the diner that he finds himself visiting every morning. Each morning like clockwork, Noah walks into the diner and heads straight to the section of the diner where he knows that Poppy will be working. With a pull towards the waitress, Noah cannot help but try to make conversation with Poppy with each passing day. A slow moving task, but one that leaves them both wondering more about the other.

Poppy doesn’t know a lot about the man that frequents her section of the diner. She can tell you what his food and beverage preferences are, but cannot really tell you anything more intimate about the man that pulls her face into a smile. What Poppy does notice is the fractured soul of a man that is in that diner day in and day out. Noah’s blue eyes have a story to tell, and Poppy isn’t opposed to being the one to delve into his heart.

When Noah asks Poppy to meet him outside of the diner, confusion and curiosity wreck her brain. An anticipation to learn more about the elusiveness that Noah exhibits. Knowing nothing about his man should send up warning flags to Poppy…..only it doesn’t. What she didn’t expect was the slow pace to which Noah led their venture upon. If only Poppy would have know what secrets were lurking beyond their meeting. Would she have taken Noah up on his request? Time has its own way of revealing the past, and Noah and Poppy are about to shatter that barrier in the most unexpected of ways.

Wow……just wow!! First let me start by saying that Michelle Leighton took the style of writing that she has done in the past and turned it upside down. The Way We Burn was nothing like I expected, and everything that I didn’t realize I ‘needed’. A story that is engaging with a twist so profound, the revelation left me reeling!
This is definitely that ‘one novel’ that has a story that’s just waiting to escape with written words. Get ready to be glued to your readers because everything you THINK you know going into this story will be turned on its head. A fantastic journey that Michelle Leighton has penned with such ease it should really be a sin!! Trust me….add this one to your MUST READ list today!! (You can thank me later!) 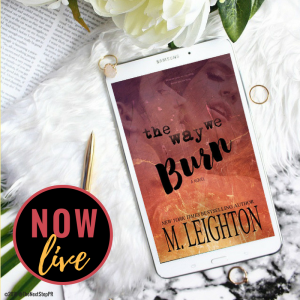 With sales nearing the two million mark, New York Times, USA Today, Wall Street Journal, and internationally bestselling author M. Leighton is now turning her pen toward another side of relationships with her work as Michelle Leighton. From her upcoming emotionally charged story, The Dandelion, to her domestic noir entitled Strings, Michelle’s stories are sure to bring all the depth you’ve come to expect from M. Leighton with a new edge that will have you quickly turning page after page.