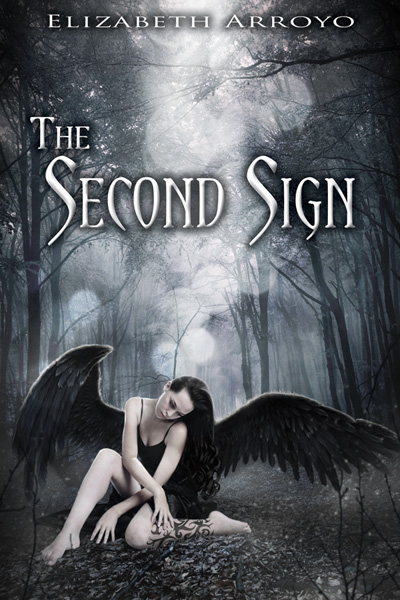 Bred to believe in the war between angels and demons, Gabby has come to the conclusion that love is responsible for war, jealousy, and all the other deadly sins she can think of. So when she’s exiled to the middle of nowhere for getting kicked out of her fifth school for fighting, she doesn’t expect to meet Jake. Much less fall in love. But Jake is quickly drawn to the eerie beauty of her violet eyes while Gabby is unsettled by their undeniable connection.

When a demon guardian comes to collect her soul, she refuses to give it up. She’s not a demon. She can’t be. Her father and twin brother are angels. The demon gives Gabby twenty-four hours to decide her allegiance, and then starts killing her short list of friends, leaving a message behind: She is the Second Sign.

As Gabby and Jake begin to unravel the mystery behind the Second Sign, she learns Jake may be the key to saving her soul. But it means a sacrifice has to be made that will change their lives forever.

I must be on an angel kick without realizing it, as this is the second angel/demon book I’ve read in less than a week! Even though the other one was Adult and this was YA, this one is definitely the darker of the two.

Take your typical YA angst, add in several huge secrets, some difficult powers, lots of death, and angels and demons and you get the gist of The Second Sign. Things change from moment to moment, and I was continually confused as to who the good guys and the bad guys were, and how everyone fit into the picture. To be honest, I am still a little confused. Which is both good and bad.

I like to be surprised confused, as long as I feel like I know what just happened at the end. It keeps me guessing and one my toes. And while there is some resolution (not a cliffhanger) at the end, I am still left wondering about a LOT of things. There were some secrets kept from the main characters, Gabby and Jake, that I don’t understand. Of course I usually disagree with the secrets being kept from ANY character, there is usually some reasoning, no matter how stupid in my opinion, as to why those secrets are being kept. I didn’t feel there was enough of an explanation as to why some of the secrets were kept. But they did make for a giant WTF moment at the end!

There were also a few character actions that confused me. I can make assumptions based on what happened later on as to why they acted the way they did, but they do a few 180’s during the story that are never really addressed by them or the people around them.

Other than that, this is a very good, very dark book. I mean, people die. In horrible, gruesome, ways. And the author doesn’t pull punches. She makes you see it, through the eyes of her characters. There is some good, but man … the evil makes a serious appearance here.

Let me just say there better be a book two. And sooner rather than later would be nice. That ending, again not a cliffhanger, left me all flustered. I need more closure, and I need to know what happens next! Because, yeah. I can’t tell you without ruining the whole story.

Born and raised in Chicago, Illinois, the youngest of five, Elizabeth spent most of her younger years as an avid reader with a wild imagination which led her to write her first manuscript at the age of fourteen.

Her fascination with the paranormal was influenced by the vivid ghost and demon stories of her father, scaring the crap out of her. It also led her to ask the “what if” question that propelled her down the path of the fantastical.

But, life got in the way. Elizabeth completed a Bachelors degree in Psychology with a minor in Criminal Justice at Northeastern Illinois University and works in the community strengthening families.

But her love of stories held, and in 2008 she found herself back into her storytelling roots and began writing again. Since then she’s published a short story in SQ Magazine, countless musings on her blog – Chandara Writes (her muse), and completed three manuscripts.

In 2012, Elizabeth signed with Sapphire Star Publishing to release her debut novel, THE SECOND SIGN, a Dark YA Paranormal Romance, slated for an early 2013 release.

Elizabeth still resides in Chicago’s south west side with her family, a household of kids, and the bliss of chaos. The good kind.  She continues to work in the community.  You can follow her journey on her Blog chandarawrites.blogspot.com