by Rebecca Yarros
Also by this author: , ,
Also in this series: , , 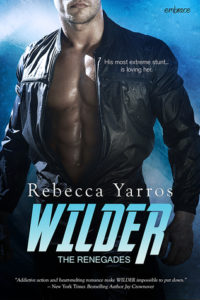 The world is his playground—especially this year—and for the next nine months I’m stuck as his tutor on the Study at Sea program.

He’s too busy staging worldwide stunts for his documentary to get to class.

But if I can’t get him to take academics seriously, I’ll lose my scholarship…if I don’t lose my heart first.

Six unlikely friends on a nine-month cruise with the Study at Sea program will learn that chemistry is more than a subject and the best lessons aren’t taught in the classroom…but in the heart. 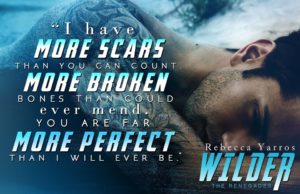 Daredevil….risk taker…..these are the qualities you first see when you meet Paxton Wilder. This reckless sports enthusiast has the world eating out of the palm of his hand. Ladies eat out of his hands and the world views his band of Renegades as the ultimate sports daredevils. No risk is too great…..no stunt unattainable. Living life on their own terms is the mantra of this rock star group of extreme sports participants.

With one of the hottest You Tube channels on the market, Pax and his friends share their insane ‘sport’ extreme ‘fun’. Fans of the group have shot the members to stardom. Causing a flurry of activity wherever they may go. For Pax – money isn’t an issue where their tricks are concerned. Well – until Pax’s father decided to demand that the renegade finish college. With a lot of stipulations – Pax agreed and set out to fulfill the promise on his terms.

Armed with an arsenal of wealth, Pax obtains a cruise ship for passage. Then he loads the Renegades, camera crews, and other tag alongs abord the Athena for a year long ’college on the sea’ program. One of the ’glitches’ in carrying out Pax’s father’s plan was that funds were dependant on Pax passing his classes. That’s where things begin to get interesting for our stuntman.

Leah was recruited to be a tutor for Pax. This job certainly had its perks. Passage for Leah and her friend Rachel was included in the contract. Things didn’t go as planned when Rachel comes down with mono. Determined to get out of the ’funk’ she is experiencing, Leah heads off on the adventure of a lifetime without the strength of Leah by her side. What she is met with is anything BUT a cheesy, stuffy set of accommodations. In fact she discovers a pair of eyes that do things to her just from the heat!

The moment Leah lays eyes on Pax, she knows he is trouble with a capital T!! The chemistry between the two can be felt from that very first moment. Doubt creeps into Leah’s mind. After all – why would a guy who has it all want someone like her? The two fight their feelings that clearly can be quelled. Determined to accept their roles at student and teacher without damaging everything Pax has to accomplish. The thrill of Pax’s lifestyle is hard for Leah to ignore. Tempting both to step outside of their roles and take a turn on the wild side together. Where will they land when this adventure plays itself out?

Holy Hotness!! Who knew that that much adventure could be packed between two really sexy covers?? I absolutely loved the unique story plot that Rebecca Yarros has shared with readers. Extreme sports enthusiasts at their finest!! Let me tell you….Pax and Leah had me hooked from the very beginning!

Thrills know no bounds in this story. Including a little suspense that will keep you on your toes. The attraction was intense…..the romance was totally HOT!! The intoxication you feel when enveloping yourself in the pages is both sexy and thrilling. I could not get enough!! Each character plays and iatrical part in the story…..added more interest for the books to come in the series. I don’t want to gush too much. Just trust me when I say that this book is one you do not want to miss out on! A glimpse of even more great things to come with the remainder of the series!!

One Response to “Review: Wilder by Rebecca Yarros”