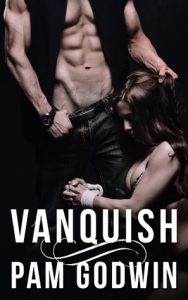 *** It is recommended to read after Deliver, but it can be read as a stand-alone. Warning: Graphic sex and violence. Age 18+ only ***

Her life is like a prison cell.
A self-made, to-hell-with-the-free-world existence that locks from the inside.
Stop judging. Her agoraphobia doesn’t define her. It simply keeps her safe.

He belongs in a prison cell.
The 6×8, make-me-your-b*tch variety that locks from the outside.
But he’s free. To hunt. To take. To break.
And he just found a sexy new toy.

Capturing her is the easy part. Her f*cked-up mind, however, makes him question everything he does next.
But he’s a determined bastard. If all goes his way, this will hurt like hell.

Van is a man with a plan, and that plan centers around Amber. Right away Van can tell that something is quite right with Amber. An attraction all own its own. Amber has her own addiction and it inhibits her activities and life in a dramatic way. Van can’t help the attraction he feels for Amber and knows that he can’t help but ‘have’ her.

Amber recognizes Van’s type of ‘crazy’ but still is attracted to the brazen and damaged soul. As Van thrusts himself into Amber’s addictions, the two become more entwined in each others lives. A toxic adventure that neither can pull away from. The only question that remains is where this journey will end.

Let me start off by saying…..I wasn’t sure I wanted to read Van’s story. Why? Well….that is where you as a reader would have to read Deliver and make your own opinions about this man!! However – I was teetering on what type of ‘madness’ would present itself with this tattered and torn character.

What I found was an unexpected trip into madness that only Van could pull off. A unique view of living life outside of what is perceived as ‘normal’ in the rest of the world. A stark realization of what ‘tainted’ love looks like. Van is definitely not the ‘guy next door’. In fact – he is as far from that as you could possibly imagine. What Van has going for him is loyalty. With so few in his life that he would protect at all costs, Van isn’t a person to take lightly.

There are so many things in Vanquish that build upon the story that unfolded within the pages of Deliver. While some will let you know you do not need to read Deliver prior to diving into Vanquish, I strongly recommend it. There is just so much that makes up the layers of Van’s character that I think you would really benefit from reading the first book in the series.

Regardless of which way you chose to enjoy the series, one thing is certain…..I have never uncovered a character quite like Van. The entire plot of the story is dark, intriguing and unique. Something that shows how well Pam Godwin can delve into the twisted, gritty world that exists in this series. Vanquish was definitely disturbing on so many levels. Add to that the intensity, thrilling plot line, and some quite sexy interaction and you have one of the most captivating dark romances I have read! Pam Godwin is a master at writing about taboo subject matter, and Vanquish certainly fills the bill on a book that needs to be added to your library!!