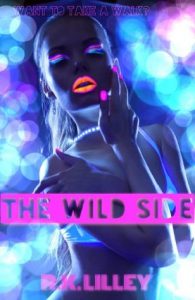 ARE YOU READY TO TAKE A WALK?

Alasdair Masters is in a rut. He just hit forty, has been nearly celibate for the past year, and his life has turned into a daily sequence of lonely patterns that revolve around avoiding human contact.
His tidy life is turned on its head when a hot young blonde at the gym that’s been pseudo-stalking him decides to rock his world. A very young blonde. Way, way too young for him. The problem is, he can’t seem to tell her no, and she just keeps coming back for more.

It doesn’t help that he’s ninety percent sure she’s a criminal, and still, he can’t seem to turn her down. What is a dull introvert to do when a chaotic cyclone that oozes sexuality comes twisting into his life?

>At first, he thinks she’ll give him a heart attack, but after his twenty-year marriage ended a year ago, he’s been a little lost, and when she comes crashing into his life, he realizes that he’s never felt more alive.

Is a walk on the wild side just what he needs to get his life on track or a disaster in the making? Is it possible for someone that much younger to be just what he needs, or is she a fortune hunter, as everyone keeps telling him? Is it his hormones telling him that the mysterious younger woman is the one, or could it be more?

Say what??? The Wild Side just took on a whole new meaning in this appropriately named book……

Tackling life after a bitter divorce can be hard for anyone. For Alasdair – the predictability of having a routine to follow every day offers comfort when the chaos became too much. In the spirit of predictability – Dair heads to the gym at the same time every single day. It’s there that Dair finds his attention drawn to a gorgeous younger woman who exercises on the machine next to his.

One conversation would change the course of Dair’s routine. Iris asks Dair for a towel, and their immediate attraction ignites. With an age difference that is lingering in the back of Dair’s mind, Iris lays out her desires and the lack of any expectations where a relationship is concerned. Dair cannot help but succumb to his longing, but where will things land in the future? Only time will tell just how twisted and desperate this relationship can become.

Hmmmmm…..what an interesting and complicated story!! Nothing about The Wild Side is predictable, and that is part of what makes this story so encompassing. R.K. Lilley certainly knows how to write some seriously smoking sexual encounters!  Dair and Iris were seriously off the charts with their encounters between the sheets (and out of them for that matter). The age gap between the two characters is significant, but definitely is laying out to be a fact that readers should keep in mind for future books.

Can I say I understood everything that was going on in this novella? Absolutely NOT!! The plot of the story escaped me at times, leading me to wonder what the significance was of certain encounters, actions, and reactions. One thing is certain……The Wild Side is definitely intriguing even if it’s just flat out complicated to understand. The sexual encounters in the story definitely carry the load of this sordid tale of the forbidden. The only question that remains is how complicated the relationship will become for Dair and Iris.

R.K. Lilley is the best selling author of the Up In The Air, and Tristan & Danika, and The Wild Side series. She lives in Texas with her husband and their two beautiful sons. She’s had a lot of interesting jobs, from being a first class flight attendant, to being a stablehand, but swears she never knew what hard work was until she had children. She’s been addicted to both reading and writing fiction since she can remember. She loves to travel, read, hike, paint, game, watch anime, and make the most of every single day. She is currently working on Breaking Him, Boss, and Crossing Fire, Book #2 of Heretic Daughter series.