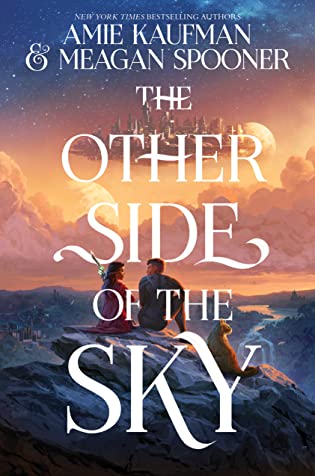 Prince North’s home is in the sky, in a gleaming city held aloft by intricate engines, powered by technology. Nimh is the living goddess of her people on the Surface, responsible for providing answers, direction—hope.
North’s and Nimh’s lives are entwined—though their hearts can never be. Linked by a terrifying prophecy and caught between duty and fate, they must choose between saving their people or succumbing to the bond that is forbidden between them.

Kaufman and Spooner make magic AGAIN. This book combines fantasy and sci-fi and I couldn’t be happier.

I’ve had a really hard time sitting down to read this year because *waves hands around at 2020* of all this, but that wasn’t a problem with The Other Side of the Sky. The problem was me staying up way too late several nights in a row and being tired at work the next day. Man, that was an excellent problem. The way they take 2 characters from very different worlds and have them interact and learn and survive was frustrating at times because of how real it was. The disbelief and confusion and misunderstandings were so relatable and frustrating that it made me want to reach into the book and shake the characters until they saw sense. I wouldn’t have wanted them to be any other way though, since this is exactly what made them feel so real. And what made the pay-off soooo worth it.

“I’m still here with you,” I murmur. The words are soft, but they’re enough to make her focus on my face again. “I’m real. And you’ve taught me to believe, Nimh. In things I can’t see or touch. But more than anything, I believe in you. And I’m real.”

I had a feeling I knew where this story would end, and I was partially right, but knowing something is so different from seeing it executed so perfectly on the page that it makes your heart explode.

I definitely connected more with North, because his position is significantly more relatable: coming from a society based on science, but not knowing exactly how everything works, being dropped into a society where everything works by magic and living gods. I would have a difficult time adjusting to that and not questioning everything too. But Nimh is pretty much what you expect from someone raised to be a humble god personified, and would be the kind of person I would follow.

She’s like a torch in the darkness, pushing away the fears and horrors of the night.

And we can’t forget the bindle cat! Showing up and leaving at his own whims, it is good to know cats in this world do not allow stupid humans to boss them around.

I am usually a character-driven reader, and these characters are awesome, but the world is just AMAZING. So complex and beautifully described that I felt like I was there. (This was enhanced when I went outside, because the river-sea is just as humid as Florida in the summer apparently.) Overall, if you loved Kaufman and Spooner’s These Broken Stars (Which is just, gah, SO GOOD), then this is right up your alley.

Now, if someone can get me some magic or device that could send the sequel back in time into my greedy little hands, I would be very grateful.