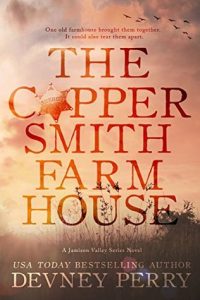 One old farmhouse brought them together. It could also tear them apart.

Gigi has just uprooted her whole world to start a new life. The unexpected gift of a farmhouse in small-town Montana is just what she and her daughter need to escape big-city loneliness. The last thing she needs is attitude from the town’s sheriff, the most perfectly attractive and ruggedly handsome man she’s ever laid eyes on—and a complete jerk.

Jess knows all about women like Gigi. Beautiful. Sexy. Scheming. She’s stolen his sanctuary, the farmhouse that should have been his. But along with a face full of freckles, she’s got a sharp wit and a backbone of steel—something he doesn’t discover until after making a complete fool of himself. If he can earn back her trust and win her heart, he might just find the home he’s always needed. 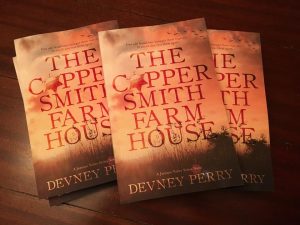 Little moments culminate into those life altering moments. You know the ones…..the little things that lead you down a path you never would have predicted. Moving to Montana to take possession of Ben’s former farmhouse was one of those times for Gigi. It was Ben’s dying wish for Gigi to live in his former home. This was a chance at a new life for Gigi and her daughter. Little did they know that Ben ‘might’ have had an ulterior motive when he bequeathed his farmhouse to the single mom.

Living in Prescott, Montana was everything that Jess wanted in life. The small town feel where everyone knew their neighbors is one of the things that made Jess’s job as Sherriff a little easier. For years, Jess has taken on the responsibilities of looking after Ben’s farmhouse while Ben was away. A task that was near and dear to Jess. With dreams of one day owning the property, Jess was blindsided when learning that Gigi was the new owner of Ben’s former home.

Determined that Gigi must be a ‘gold digger’, Jess formed a lot of preconceived notions about the new girl in town. Ideas that manifested into a bit of anger toward the woman that Jess knew nothing about. Georgia can’t help feeling an attraction to the man that literally grates on her last nerve. A firestorm that brews every time the two get in the same space. What neither could have known was they both were getting a little nudge from beyond the grave. Ben knew that Jess and Georgia were missing something in life…..each other!!

At the recommendation of many – I decided to check out all the hype surrounding The Coppersmith Farmhouse by Devney Perry. With the small town of Prescott, Montana as the backdrop, this story has a somewhat predictable plot between Jess and Gigi. The character that stole the show was Rowen – Gigi’s daughter. A spitfire that added her own depth and originality to a romance novel that was simple and sweet.

While I enjoyed the book, I did foresee a lot of the story unfolding. It didn’t lack in originality, but there were times where I just didn’t think things progressed between Jess and Gigi the way that they should. Now – there were a slew of secondary characters that captured my attention. Jess and Gigi also redeemed themselves as the story progressed. I think I was expecting an over the top romance based on ‘hearsay’ that just didn’t end up that way. While this story was a sweet romance, I think I am interested in a few of the Prescott residents stories that are yet to come.