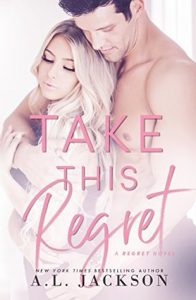 There are some mistakes we make that we will regret for the rest of our lives. For Christian, it was the day he betrayed Elizabeth.

Christian Davison has a plan for his life. He is determined to become an attorney and to one day take his place as partner in his father’s law firm. Nothing will stand in his way, not even Elizabeth Ayers and their unborn child.

Or are there some wounds that go so deep they can never heal? They say everyone deserves a second chance.

Lost to You and Take This Regret can be read as Stand-Alone Novels.

Recommended reading order: Lost to You, Take This Regret, If Forever Comes 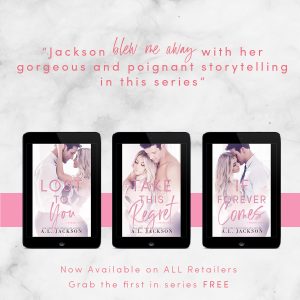 Goals can be the driving force for many. A focus to set your eyes upon in order to achieve your dreams. Christian Davison has set a goal for himself to become an attorney and work in his father’s firm. An achievable dream that comes with its own set of struggles and obstacles.

With the girl of his dreams by his side, Christian finds himself relishing in ‘living the dream’. Until one revelation changes the course of his life. Elizabeth drops the one factor into Christian’s life that can upend all of his plans. An unplanned pregnancy that threatens everything that Christian has worked to achieve. Instead of the happy response that most individuals receive, Christian lays and ultimatum at Elizabeth’s feet. A choice between Christian or the pregnancy that threatens to end it all.

For Elizabeth, there is no choice. Nothing means more to her than the life growing inside her body. Christian makes the decision to turn his back on the woman that will be the mother to his child. As the years pass, Christian reflects upon the biggest regret in his life. Where is Elizabeth and the child that Christian turn his back upon so many years prior?

Christian’s job with his father’s company has landed him across the country. As luck would have it, Christian now resides in Elizabeth’s hometown. A cause for Christian to reflect on what he is missing out on by rejecting his child and all attachments to parenthood. Then a chance encounter in the grocery store brings Christian full circle. A child that looks so much like a reflection of himself captivates Christian. Could this young girl be the child that Christian abandon so long ago?

Consumed with regrets, Christian decides to uncover Elizabeth’s whereabouts. A task that was far easier than Christian could have imagined. When Christian comes face to face with his past, Elizabeth is far from welcoming to the man that abandoned her so long ago. How can Christian prove to Elizabeth that he is a changed man and become a presence in his daughter’s life?

Take This Regret is an astounding look at what happens to a relationship when all the wrong choices are made. Christian is living a life full of regret. Regret for walking away from his girlfriend and the child that he never knew. Elizabeth is torn over facing the man that had the power to alter her life in ways that no one could have predicted. A firestorm that is sure to erupt in fury. How will all of this affect the daughter that they both love?

This novel is definitely one that will leave you feeling tons of emotion. I found myself made at each of the characters at certain points. No one can predict how a situation like this will unfold. A.L. Jackson has written this story with such ease, you can imagine every moment like it played out in front of your eyes. A testament to the skill of the authors writing style. While I won’t divulge anymore about the plot, I can tell you that this book will leave you running the entire spectrum of emotion.

One Response to “Review: Take This Regret by A.L. Jackson”