by Wendy Higgins
Also in this series: 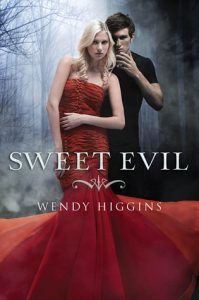 What if there were teens whose lives literally depended on being bad influences?

This is the reality for sons and daughters of fallen angels.
Tenderhearted Southern girl Anna Whitt was born with the sixth sense to see and feel emotions of other people. She’s aware of a struggle within herself, an inexplicable pull toward danger, but it isn’t until she turns sixteen and meets the alluring Kaidan Rowe that she discovers her terrifying heritage and her willpower is put to the test. He’s the boy your daddy warned you about. If only someone had warned Anna.

Forced to face her destiny, will Anna embrace her halo or her horns?

Life has always been a little strange for Anna Witt. The ability to read the auras and emotions of those around her was a ‘gift’ that Anna possessed for a large part of her life. Another strange quirk was the ability to focus on smells even from afar. While this may be exciting for some, Anna was determined to keep her gifts a secret from those around her. Thus leaving Anna on guard of her emotions and thoughts more often than not.

Then a chance encounter at a concert leaves Anna bewildered. That is where Anna crossed paths with Kaiden Rowe. For the first time ever – Anna realized that she didn’t see an aura surrounding Kaiden. Instantly – Anna feels an inexplicable pull towards Kaiden. That is just one of the things that Anna learned after meeting Kaiden. Another would be finding out that Kaiden is a half-demon, and any relationship with him is off limits.

As the son of the Duke of Lust, Kaiden can’t help but to desire to ‘sully up’ Anna’s wholesome life. Everything about Anna is intriguing, but definitely forbidden. With his desires in overdrive, Kaiden convinces Anna to learn more about her past. As the secrets unfold, Anna quickly discovers a world that was kept at arms length most of her life. A stark contrast to everything that the young teen thought she knew. With angels, demons, and more supernatural entities lurking about, how can Anna stay off the radar and still maintain her innocence?

First let me say…..it is truly a gift to create the world that these characters reside within. Wendy Higgins has not only written a YA fantasy with angels, demons, and whisperers….but the entire realm can truly be imagined by the descriptive writing within this novel. I only wish I had read this book years ago!

Sweet Evil will definitely lead you down the rabbit hole. It is really hard to not want Anna to succumb to whatever means necessary to remain in the arms of Kaiden Rowe!! This tale is tempting, engaging, and a tad romantic!! Just the right combination for a series full of twist in the road!! I can’t wait to discover what is in store for this duo. It certainly was an interesting twist on Good vs Evil.