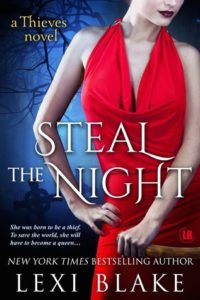 She was born to be a thief. To save the world, she will have to become a queen…

Zoey Donovan-Quinn is growing restless. After months of searching, her crew hasn’t been able to locate the resting place of the one man who could save Daniel. While they frantically continue their quest, Zoey is still struggling to recover from the devastating losses she suffered in Faery. In the midst of her grief and worry, Louis Marini appears and demands the Blood Stone he forced Zoey to steal. Zoey has no other choice than to hand it over.

When the giant ruby’s true nature is revealed, Zoey discovers she has given their greatest enemy a weapon of unimaginable power. Equipped with the Blood Stone, Marini intends to dominate the supernatural world and, on a more personal note, claim Zoey as his companion.

Desperate and on the run, Zoey, Dev, and Daniel forge an unlikely alliance with an old adversary who claims he can lead them to the wizard who can free Daniel from Marini’s clutches and help him claim his throne. As they race to solve a thousand-year-old mystery and gather their forces for the ultimate battle, Zoey prepares to do what she does best.

If Daniel and Dev are to have any hope of victory, she will have to do the unthinkable… surrender to Louis Marini and steal back the Blood Stone. 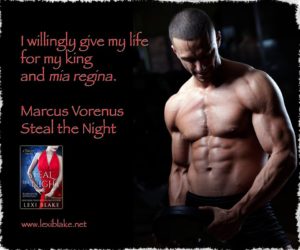 Sometimes a gals work is never done!! Zoey now has the Blood Stone in her hands, and Marini is demanding that he get his hands on the object. With the device on Daniel’s heart a constant threat, Zoey and the gang are determined to find a way to overcome the hazards of the device. Their quest will be riddled with ups and downs in this chapter of their lives. Looking for help will lead the group to an unlikely ally….Merlin.

It’s a magical world when paths are crossed with Excalibur, the Lady of the Lake, Merlin and other mystical elements. Possibilities in this tale are endless and riddled with excitement. Daniels life is on the line and Zoey will do anything to save the man that she has loved her entire life. With Marini controlling Zoey, unexpected allies will be the driving force in putting an end to the reign of one of the oldest vampires around. As with anything that seems to cross Zoey’s path….there will be a ‘price’ to pay for giving Danny the freedom that Zoey and Dev so desperately desire.

What a wild ride!! The thrills for Zoey, Dev and Danny just keep on rolling. With Danny’s life hanging in the balance, Zoey and the gang lead readers on on heck of a thrilling ride. The plot to Steal the Night is no less thrilling than the other books in the series. It does provide a few more tears than the other books!! This triad rivals all others in the romance department. Lexi Blake has pulled me in with each and every book, and the thrills just keep on coming!!

While Steal the Night is NOT a stand alone, I strongly recommend this series to all lovers of romance. In fact – you do not have to be a paranormal fan to enjoy the elements of this novel. It’s engaging, gripping, and I just can’t get enough of the ménage that is Danny, Zoey, and Dev!!