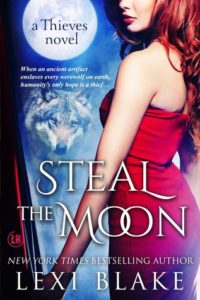 When an ancient artifact enslaves every werewolf on earth, humanity’s only hope is a thief…

Zoey Donovan should be happy. Her love life couldn’t be better, her demonic nemesis is on the run, business is booming, and no one has tried to kill her in seven whole months. But without her best friend to share it with, it all seems a little hollow. Neil, her fabulous furry wingman, is missing and two grumpy werewolf bodyguards have taken his place.

Undaunted by her humorless babysitters, she intends to track Neil down even if it means risking her newfound romantic bliss. But someone else has plans for Zoey, and they don’t intend to play nice. Lucas Halfer is desperate for revenge, and he knows just how to get it.

An ancient Roman legend tells of an artifact that will grant its possessor the power to control all wolves. No one, including Daniel and Dev, believes the Strong Arm of Remus is real but Zoey thinks Halfer might have already located it. With every werewolf pack in North America gathering in Colorado, the demon could enslave an unstoppable army.

To save the day, and possibly the world, Zoey will have to find a way to steal the Strong Arm of Remus from one of the most powerful demons in existence. Then again, impossible is kind of her specialty.

Purchase Steal The Moon on AMAZON !!

Now that Sarah has been rescued from the wrath of Hell, Zoey finds herself relishing in a bit of pampering at the insistence of Dev. While Zoey is still not safe from the demon that is stalking her, she does have the distraction of a black card at her disposal. With her day planned out for her by the minute, Zoey wonders if this is the type of life she will lead from now on.

Life for Zoey seems a little dull in spite of all the distractions at hand. Neil is missing and Zoey just can’t stand having her best friend around to share all of the joy and sorrow in life. Determination fuels Zoey to find Neil and bring him back home.

Now an ancient artifact is once again at the center of Zoey’s world. This one is suppose to posses the power over all of the wolves. No one thinks this artifact is real….except for Zoey!! In fact – her greatest fear is that this ancient artifact will fall into the hands of the demon that is stalking her every move. With no other choice, Zoey decides to track down the artifact before it can be used against the wolves who would be helpless to its hold.

While tragedy is looming on the horizon, Zoey relies on the comfort of Dev and Daniel during this time in her life. A trifecta that is growing stronger by the day. There is one thing that Zoey knows for sure….the men in her life are discovering that they are the strongest when all three come together.

Mmmmm…..I seriously love this series with each and every page that comes across my reader!! This series has everything that a paranormal enthusiast loves…..angels, demons, witches, werewolves, vampires, fairies and of course every creature in between. Fans of Lexi Blake will devour this unique story and the amazing triad that Zoey is a part of. The sex……well, it is off the charts hot!!!

Steal The Moon must be read in the series order to understand all of the nuances of this tale. It’s a journey that you simply must explore to enjoy!! Counting down the moments until I can dive into the next book!!