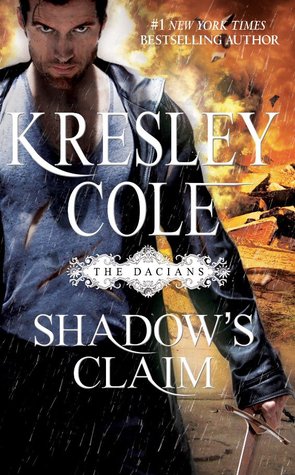 Where you can get it: Amazon

Barnes & Noble
Format I read it in: Kindle
Overall Rating: 5
Vote for Trehan in the Alpha Showdown

Shadow’s Claim features Prince Trehan, a ruthless master assassin who will do anything to possess Bettina, his beautiful sorceress mate, even compete for her hand in a blood-sport tournament—to the death.

He won’t be denied…

Trehan Daciano, known as the Prince of Shadows, has spent his life serving his people, striking in the night, quietly executing any threat to their realm. The coldly disciplined swordsman has never desired anything for himself—until he beholds Bettina, the sheltered ward of two of the Lore’s most fearsome villains.

She’s bound to another…

Desperate to earn her guardians’ approval after a life-shattering mistake, young Bettina has no choice but to marry whichever suitor prevails—even though she’s lost her heart to another. Yet one lethal competitor, a mysterious cloaked swordsman, invades her dreams, tempting her with forbidden pleasure.

A battle for her body and soul…

Even if Trehan can survive the punishing contests to claim her as his wife, the true battle for Bettina’s heart is yet to come. And unleashing a millennium’s worth of savage need will either frighten his Bride away—or stoke Bettina’s own desires to a fever-pitch…

I have never highlighted more passages or bookmarked more pages than I did while reading this book. Honestly this review is going to be difficult to write without just quoting the story. Threhan is such a sexy bad-ass that just about everything he says and everything that describes him makes me love him. This review will probably be more Trehan gushing than anything else. If that bothers you, then skip to the end. 🙂

Let’s just start with Trehan – a centuries old vampire assassin in line for the throne. So yeah, he is pretty good at his job.

“That’s the thing about an assassin – wiv each kill, he risks capture or death himself. A long-lived assassin means he wins every single time.”

Which of course means he is not used to losing. Ever. So he is understandably upset when Bettina doesn’t immediately go to him. But he is not afraid of fighting – and killing – for her. And he proves he’s earned every year he’s lived.

Oh and did I mention he lives in a library. Not that he has one, but has made the library his bedroom. O_O

He is also very practical:

“Know that I’ll kill the Horde vampire for free.” At her frown, he explained, “I will require his tent for the duration.” And then he was gone.

I have got to stop talking about Trehan, otherwise you will think there are no other characters worth liking in this story. One of MY FAVORITE side characters is Morgana. She is an unapologetic evil bitch – and I love every second she is on the page.

Raum had once asked Bettina, “How can you even tell your godmother loves you?”
“One, because Morgana keeps visiting me in a realm she hates. Two, because I keep surviving the visits …”

In a distracted tone, Morgana answered, “Do excuse me. Someone needs to die.”

I got some strange looks on the airplane when I laughed out loud at that last one. No regrets.

Honestly, anything I say is just going to be me gushing about this book. It was fabulous. So fabulous in fact that I had to be Trehan’s champion for The Vampire Book Club’s annual Alpha Showdown. You can help me get Trehan to the next level by voting, starting TODAY (right now, right this second) and only for 48 hours. Just click the link and you should go right there. If he makes it to the second round, I will love you all forever. (I will love you forever if he doesn’t but let’s not tell anyone that.)