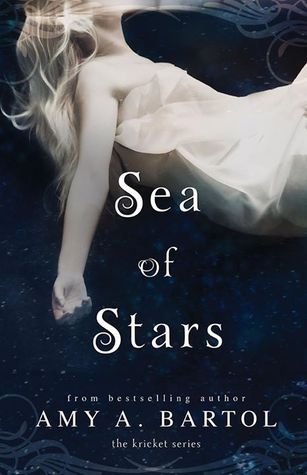 Eighteen-year-old Kricket Hollowell was looking for her place in the world when she discovered that the universe was bigger—and more dangerous—than she had ever dreamed. Now, whisked across space to the planet Ethar, Kricket learns that her genetic ability to see the future makes her a sought-after commodity…and the catalyst for war between her star-crossed parents’ clans. According to Alameedan prophecy, one house will rise to power and the other will be completely wiped out, and Kricket’s precognition is believed to be the weapon that will tip the scales.

A target of both the Rafe and the Alameeda houses, Kricket finds protection—and a home—in the arms of Trey, her Etharian bodyguard-turned-boyfriend. But her visions of what’s to come disturb her deeply, especially since she must discover whether the gift of foresight will allow her to rewrite the future, or if her fate is as immovable as the stars.

After I finished Under Different Stars last year, I was dying to get my hands on book 2, Sea of Stars. Every couple of weeks I would check to see if maybe the publication date had been moved up, or if I could get my hands on an early copy (even though I had already pre-ordered it). Needless to say, when I finally got the chance to read it, I was extremely nervous. Whenever I have that much build up for a book I am terrified that it isn’t going to live up to my expectations.

Well, Sea of Stars picks up the morning after the end of book 1, where you were left in a somewhat calm place. Not any more! From early on it is GO GO GO for Kricket and Trey and friends. And not friends. Kricket has grown up a lot since we first me her trying to get by and stay out of the system. Not only does everyone want her, she is smart, and brave, and powerful. And she is learning to control that power in ways that could turn the tides of the war.

I shared her frustrations at times, when no one but her personal guard would believe her. I caught myself on more than one occasion grinding my teeth in sympathy with her. Knowing something and being able to do nothing about it and being called a liar … that would kill a part of me. But fortunately Kricket is made of stronger stuff than I am, so she finds ways to power through her obstacles.

Trey is … well Trey is fantastic. While he does everything he can to protect Kricket and help her, he knows that sometimes she has to help herself. That is one of his best traits – he knows that not all enemies can be defeted for you, some you have to take out yourself. He lets Kricket be her own hero when she needs to.

I can’t really say much more because I am afraid I will give things away. Remember how I said I was dying for book 2? Yeah, let’s just say the wait for book 3 might actually drive me to insanity. Just lock me up now. There is no hope for me. If Ms. Bartol cares for my mental state, she will write like the wind!