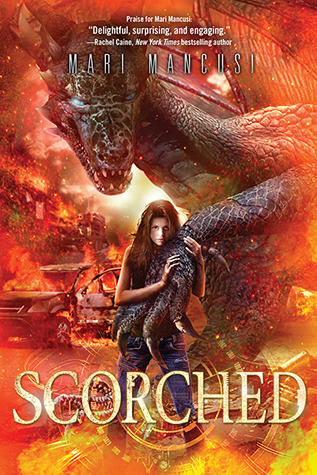 Trinity
Don’t leave me here... It starts with a whisper. At first Trinity thinks she’s going crazy. It wouldn’t be a big surprise—her grandpa firmly believes there’s a genuine dragon egg in their dusty little West Texas town. But this voice is real, and it’s begging for her protection. Even if no one else can hear it...

Connor
He’s come from a future scorched by dragonfire. His mission: Find the girl. Destroy the egg. Save the world.

Trinity has no idea which brother to believe. All she has to go by is the voice in her head—a dragon that won’t be tamed.

I went into this book for leisure, and yes I’m one of those horrible bloggers that doesn’t review leisure reads…yes I know, reviews are good for the authors, and I know it’s the least I can do to give back for the awesome story they’ve allowed me to read and experience. So here I am, reviewing this book because I found that I liked it more than I expected, and I wanted you all to know.

I’ve read other Mari Mancusi books and have enjoyed the fun, adventure, action, and romance in them, but this one was different. There was less humor, two totally yummy boys, and Trinity who is just trying to hang on day by day. And also dragons, who doesn’t love dragons? (Insert here my love of Game of Thrones and Khaleesi). 🙂 So back to why this book surprised me, I think because everything else I’ve read by MM was either fun/light reading or was just a miss for me (Tomorrow Land), I didn’t have very high expectations of Scorched. I found myself really enjoying Trinity’s perspective and that of Caleb and Connor. The beginning of this story starts off in a museum, a fossil museum to be exact and Trinity’s Grandfather has a surprise for her. A dragon egg. Trinity can’t believe that they are in danger of losing their home and he’s buying dragon eggs.

I really enjoyed this book. But the last few pages sealed the deal for me, I won’t give anything away so that’s all I’ll say. Fortunately, the reason I even picked up Scorched was that it was a Kindle daily deal and I got it for $1.99 so since I had planned on picking it up at some point, so I just bought it. Anyone who enjoys MM’s writing will enjoy this book and also anyone who loves dragons and dystopians will love it too.