by Jay Crownover
Also by this author: , , 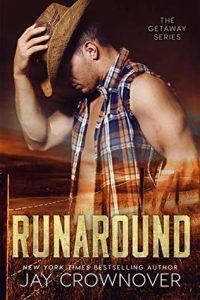 Can two people perpetually moving in opposite directions ever end up in the same place? Or will love just keep giving them the runaround?

Webb Bryant is intimately acquainted with every type of trouble there is. Trouble is all he’s ever known and the only constant in his life.
Webb’s a man constantly on the move. He’s a drifter. A wanderer. He bolts from one bad choice to the next, never able to put enough distance between himself and the ghosts from his past. He lives hard and fast, until everything comes to a screeching halt the moment he lays eyes on Tennyson McKenna. The stunning woman appeared out of nowhere to save the day, and Webb’s been unable to forget her. The leggy, blonde forest ranger might very well be the one person in the world important enough to finally keep him in one place. Only, Ten isn’t impressed by Webb’s knack for finding trouble. And no matter how hard he tries to shake it, he can’t escape his bad habit of falling into the deep end of questionable decisions. When his newest brush with trouble gets Webb in way over his head, Ten jumps after him into the dangerous waters. It’s possible they’re going to sink so fast they both might drown.

Tennyson McKenna makes it a point to be diligently cautious in all aspects of her life. She learned the hard way that leading with your heart instead of your head gets you nowhere.

Ten’s a woman stuck in a frustrating rut. After a string of failed relationships lands her back home, a pit stop to mend her broken heart becomes a hole she’s lost the will to dig herself out of. Coasting through her days was easy until Webb Bryant crash-landed in her path, complete with bullets, blood, and a grin far too charming for his own good. Webb is anything but safe and predictable. He’s everything Ten swore she would never gamble on again, but it’s impossible to ignore the way trouble follows him around like a shadow. And every single time Ten pushes Webb away, she finds herself chasing after him before he’s gone for good. When Webb’s past finally catches up to him, Ten has to decide if she’s brave enough to put her heart on the line for a man who might be gone tomorrow. 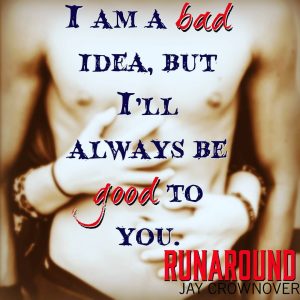 Trouble finds a way to follow Webb Bryant throughout his life. While attempting to create a new life in Wyoming, Webb is taken into custody for a series of robberies he knows nothing about. Determined to clear his name, Webb must lean on the one person that he wants nothing more than to find a future with.

Tennyson McKenna hasn’t had the best track record in the romance department. Those mistakes have led the strong willed Ten to be a bit more guarded with her heart. Nothing could have prepared Ten for the way Webb would push through her defenses. Now – the cost of Webb’s safety and innocence will lead Ten into the past. With a former lover that is determined to sacrifice Webb’s freedom for notoriety, Ten will have to risk it all to uncover the secrets that are threatening to harm the man that has captured her heart.

Runaround is the latest installment in the Getaway series by Jay Crownover. It is filled with broken hearts, long lost siblings, and a quest to uncover the lengths one will push towards to save the one that holds their heart. Ten and Webb will travel through many hurdles and heartache to uncover the cage around their hearts. Their attraction is one that will capture your attention and leave you desperate for more. Simply put – I couldn’t get enough of these two!!

Love is never perfect, a reality that Ten and Webb know all too well. What matters most is the devotion and joy from finding that one true love. That sentiment cultivates into a great romance that has a secret lurking in the background. Runaround was a wonderful compliment to the two characters that deserve that chance at finding the missing piece of their soul. If you haven’t had the pleasure of reading the Getaway series – make sure to add it to your collection today! ! 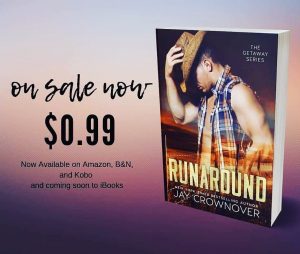