by Tiffany Snow
Also by this author: , , 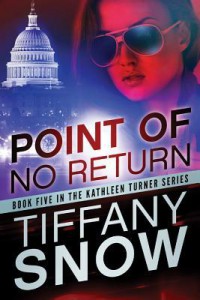 Point of No Return
Author ~ Tiffany A Snow

Kathleen Turner wasn’t expecting to fall in love when she came to Indianapolis a year ago, much less with two very different men. And not just any men. Brothers.

Blane Kirk, former SEAL turned attorney, is every woman’s dream man. A playboy who changes women as often as he changes his tie, trying to hold on to Blane could only break Kathleen’s heart.Commitment is a foreign word to Kade Dennon, assassin-for-hire and genius hacker, and safety is non-existent. A future with Kade would surely end in disaster—for both of them.Past betrayals come to a head and the choice Kathleen makes could sign her death warrant. Everything’s at stake as Blane, Kade, and Kathleen reach the Point of No Return. 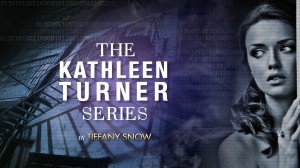 As Kade’s life hang in the balance, Kathleen finds herself torn between two men. Her feelings for Blane are still there despite their breakup. Seeing Kade in the hospital rouses a fear of losing Kade. This result in nights spent by his side, seeking comfort from her fears. Both men make their intentions know, plunging Kathleen further into indecision.

A string of circumstances will finally result with a decision from Kathleen. Things should be on the right track in her life. However – that couldn’t be further from the truth.

‘There’s no such thing as a happy ending’.

Love and loss seem to go hand in hand for Kathleen. Despite all of the emotional turmoil she experiences, a new type of hope leads Kathleen towards a new life. One that will lead her back home. Unbeknownst to Kathleen, another threat on her life is looming around the corner. This time the stakes are ’different’ and Blane and Kade are determined to keep her safe. Decisions and consequences will lead their paths down a road that defines their future.

Is it really the end? The twists and turns of the Kathleen Turner series explode in this final installment of the series!! The romance between the trio will pull you in and leave you gutted at times. Each chapter revealing a new side to the characters while leaving you on the edge of your seat. There were times that I couldn’t tell where we were headed with the love affair. The ending – well, I don’t think I could have asked for better. What a beautiful way to wrap things up. By the end – I was spent. The range of emotions leading me on one heck of a roller coaster!! There is no other way around it……Tiffany Snow ’rocked the house’ with Point of No Return!!

Tiffany attended the University of Missouri – Columbia, attaining two degrees in History and Social Studies Education. After working many years as an instructor and consultant in the Information Technology field, Tiffany now writes full-time.
Tiffany loves to read and has been reading romance novels since she was way too young to read such things. She has an unhealthy obsession for all things Doctor Who, prefers Pepsi to Coke and Absolut to both, thinks men who drink girly cocktails are wusses, has learned to never stop believing in her beloved St. Louis Cardinals, and can recite the entire scripts of When Harry Met Sally and Apollo 13. George Washington is cool, Bon Jovi still rocks the house, and Bruce Willis is the ultimate alpha-male hero.
Married with two wonderful daughters, Tiffany and her family make their home in Kansas City, Missouri, not far from where she was born and raised in St. Louis, Missouri.