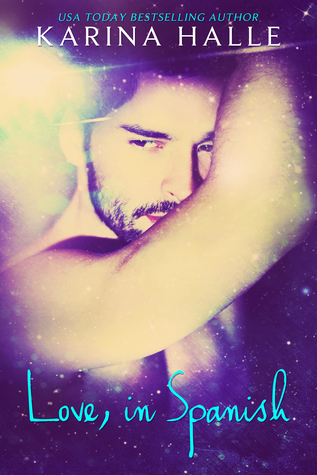 The companion to the highly emotional, scandalous and USA Today Bestselling love story - LOVE, IN ENGLISH - is finally here! Love, in Spanish is a Love, in English follow-up novel told from Mateo Casalles' POV. While Love, in Spanish touches on some events that happened in LIE (you know the ones!) it is a whole new story set a year later that continues with Vera and Mateo's "happily ever after." Note: It should be read after Love, in English and it is mostly new material (aka not just rehash of LIE).

“She sat beside me on the bus – and she changed my whole life.”

Successful, wealthy and absurdly handsome – Spanish ex-football player Mateo Casalles seemed like he had it all. A high-society wife, an adorable little girl, and flashy apartments in Madrid and Barcelona only sweetened the deal. But there was more to Mateo than met the eye – a life of uncertainty and regret that colored his black and white world.

That was until Vera Miles came into his life like a shooting star. Tattooed, wild and young, Vera seemed like Mateo’s polar opposite at first. But you can’t choose who you fall in love with and the two lost souls did everything they could to be together, all while suffering the grave consequences.

Now with Mateo divorced and living in Madrid with Vera, there is a whole new set of challenges and setbacks facing the couple and rocking the foundation of their star-crossed relationship.

Unfortunately for them, the brighter the star, the faster they burn.

Not being a super fan of the Contemporary Romance genre, I am continually surprised by how thoroughly I am entranced by Halle’s stories. Love, In Spanish is a great continuation of Vera and Mateo’s (*sigh* Mateo, hang on, we will get there) love story, and showing that happily ever after isn’t always the case. There are trials after The End that they still have to struggle through. It proves, once again, that love on it’s own doesn’t conquer all. That it also takes determination, stubbornness, and forgiveness to make it work.

LIS is a treat, in that we finally have Mateo’s point of view on things, we are in his head, and in his heart. I am convinced Halle is actually a man (even though I’ve met her) because any time she writes from a male POV it seems so real, and not watered down like it can be from other female authors. Mateo is a strong man, yet sensitive and emotional. He feels things at 100%, be they good or bad.

“As I sit back in my chair, the room seems to glow brighter, the fluorescent lights buzzing louder. Everything inside me seems to be caught in a stranglehold. It’s like I don’t breathe, I don’t bleed, I don’t have a heartbeat. I feel like my anger is so raw and terrible that’s it’s actually trying to kill me on the spot. I don’t think I’ve ever been this livid, felt so fucking hopeless, in my whole entire life.”

As much as I wanted things to be easy for Vera and Mateo at the end of Love, in English I knew there was no way they had an easy road ahead. With all their hurdles they had to overcome before they could even be together they should be no stranger to adversity, but being together has created it’s own unique set of problems. As sure as I was that they were meant to be, THEY had to be sure. Their story is heartbreaking, uplifting, emotional, and passionate. And yes, this non-crier might have had something in her eye at some point during their journey. And it is a journey you will not regret taking with them for a second.

One Response to “Review: Love, In Spanish by Karina Halle”