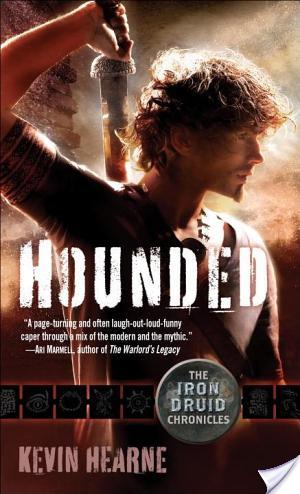 I received this book for free from Net Galley, the Publisher in exchange for an honest review. This does not affect my opinion of the book or the content of my review.

Atticus O’Sullivan, last of the Druids, lives peacefully in Arizona, running an occult bookshop and shape-shifting in his spare time to hunt with his Irish wolfhound. His neighbors and customers think that this handsome, tattooed Irish dude is about twenty-one years old when in actuality, he’s twenty-one centuries old. Not to mention: He draws his power from the earth, possesses a sharp wit, and wields an even sharper magical sword known as Fragarach, the Answerer.

Unfortunately, a very angry Celtic god wants that sword, and he’s hounded Atticus for centuries. Now the determined deity has tracked him down, and Atticus will need all his power plus the help of a seductive goddess of death, his vampire and werewolf team of attorneys, a sexy bartender possessed by a Hindu witch, and some good old-fashioned luck of the Irish to kick some Celtic arse and deliver himself from evil.

I don’t read many male authors. It isn’t because I have something against them, but there aren’t many male authors writing Urban Fantasy, which is my favorite genre of all time. So when I heard about The Iron Druid Chronicles by Kevin Hearne I knew I had to check it out.

Hounded introduces us to Atticus. An ancient Druid living in Arizona and doing a darn good job of blending in with us average joes. That is until his gods start messing with his life. Silly gods. If only they would read Urban Fantasy books they would know their meddling really puts us in a tough spot. But they have to entertain themselves somehow …

Atticus is a very believable character. His morality is a little skewed from ours, but what would you expect after having lived as long as he has? His thought process constantly cracked me up, and it is pretty much what I imagine the inside of a guys head is like.

And his dog Oberon. I want Oberon. And I want to be able to communicate with him as well. That has to be one of the best perks ever. He is a great side-kick and side character. And Atticus so obviously adores him. It is pretty cute.

Since this is the first book in a series, there is some world building but it isn’t overwhelming. The one thing I did have trouble with was the language. There are a lot of Gaelic (I am assuming) words used and while I appreciate the authenticity, and there is even a glossary in the front to help with pronunciation, I still ended up making up words in my head as I read. Don’t let that scare you off from a great book though, it’s just a pet peeve of my own :-).

Overall, anyone who likes a good solid UF without all the messiness of a romance will love Hounded!