by Rebecca Yarros
Also by this author: , ,
Also in this series: 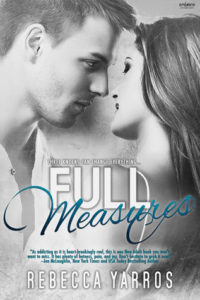 Three knocks can change everything…

“She knew. That’s why Mom hadn’t opened the door. She knew he was dead.”

Twenty years as an army brat and Ember Howard knew, too. The soldiers at the door meant her dad was never coming home. What she didn’t know was how she would find the strength to singlehandedly care for her crumbling family when her mom falls apart.

Then Josh Walker enters her life. Hockey star, her new next-door neighbor, and not to mention the most delicious hands that insist on saving her over and over again. He has a way of erasing the pain with a single look, a single touch. As much as she wants to turn off her feelings and endure the heartache on her own, she can’t deny their intense attraction.

Until Josh’s secret shatters their world. And Ember must decide if he’s worth the risk that comes with loving a man who could strip her bare. 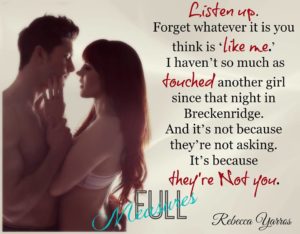 It’s amazing how your life can change in an instant. A simple knock on the front door. A ‘tale tell’ sign that everything that you knew was good in your life was about to change. That one single moment a catalyst for the pain that was sure to come. A fear of how that moment changes it all……

Those three raps at the door changed Ember’s life that day. It was her birthday, but now would forever be associated with the day that her father’s life ended while on a tour. As Ember watched her mother fall to pieces, she knew that the hard decisions that kept their family moving were now falling upon her shoulders. What she never expected was to find a ‘savior’ in the arms of her brother Gus’ hockey coach…..Josh Walker.

The hockey star that haunted her dreams in high school was now finding his way into her life. Josh seemed to always know when Ember was over her head dealing with the struggles that faced her siblings and mother. He even stepped up to help care for Gus during the days that followed. A shoulder to lean on when she felt she could do no more. A set of strong arms to carry Ember when she felt she couldn’t go on.

As the two spent more time together, they fight it harder to fight the fireworks that are swirling around them. Josh – ever the gentleman – making sure he always lets Ember have the final say in how their relationship proceeds. When they find that fighting their attraction is no longer an option, a secret from Josh’s life is revealed. Will it be the thread that unravels everything that they have built up to this point? Can Josh hold on to the one person that sets a fire in his soul?

My….oh my….what a beautifully written story!!! Each detail about life in the military is accurate and detailed throughout the book. Josh and Ember face the loss, commitment, and honor that exists for each family faced with the trials and triumphs of giving their entire existence to keeping this nation safe. Rebecca Yarros has captured each heart wrenching moment in a way that leaves you longing to know more about these two amazing characters.

Everything about Full Measures is captivating!! An excellent book that will take you on an emotional journey that will leave you believing in true love! Loved every single word that was definitely written with an amazing amount of heart and soul. 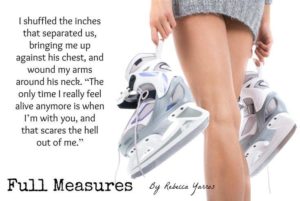