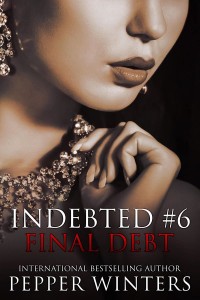 The Last Book in the New York TImes Bestselling Dark Romance Series. Where love tries to triumph and darkness continues to reign….

“I’m in love with her, but it might not be enough to stop her from becoming the latest victim of the Debt Inheritance. I know who I am now. I know what I must do. We will be together—I just hope it’s on Earth rather than in heaven.”

It all comes down to this. 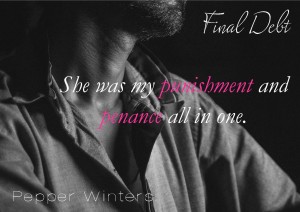 Could this be it? Time for the Final Debt to be paid. Has Nila run out of ways to escape her fate? Is there no way to break the cycle of so many years of Weaver and Hawk feuding?

Love and hate. The emotions have run hand in hand for Nila since Jethro first came to claim her for the Debt. Each torment that has been suffered from the hands of a Hawk only strengthened Nila’s will to fight. No matter how hard they sought to break her, Nila fought back. Grasping from the depths of her will…fighting for every Weaver that came before her. Determined to break the cycle.

Nothing prepared her for Jethro. The man Nila should hate. The captor that has now grabbed her soul. A love that grew from the hate. Now that love is tested.

Final Debt is the book that so many fans of the Indebted series have waited for. Readers will pick right up where the last book ended. What you will find are revelations about the past, secrets that have been hidden so carefully, and a love that faces any battle head on. In the end….we all have one question….will the Hawks prevail in their reign of terror? Can Nila and Jethro break the cycle of death that surrounds their family legacies.

For me, I found myself soaking up this story. Wondering if the over the top antics of the Hawk family would end anytime soon. The destruction that Cut and Bonnie have dealt out during their lifetime tops all other Hawks throughout the centuries. I found myself rooting for Jethro and Nila….wondering if either would see the ‘end’. What I discovered were more secrets that I needed answered. My answers came in an unexpected surprise.

What were they? Well – I am certainly not spoiling one single moment of this series for you. Grab the book…but be prepared to read all the way to the end. Trust me – you will want answers too!!

Get ready for the BONUS Book …. 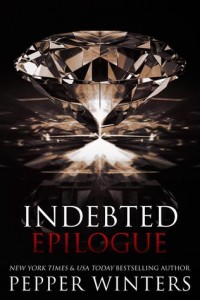 A surprise addition to the Indebted Series by Pepper Winters!!

Fans of this series will love the extended Epilogue. With questions still lingering ….this epilogue rounds out the end of a consuming and heart pumping series. Told in multiple points of view, The epilogue closes the chapter on our favorite characters throughout the series.

It was a great addition to the series and completely closed the door on any lingering thoughts I may have. Make sure you read the entire series BEFORE sneaking a peek at this treat from Pepper! 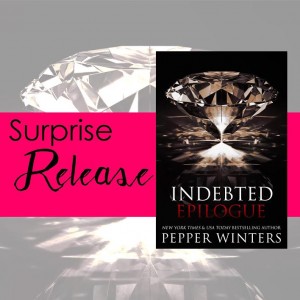 2 Responses to “Review: Final Debt by Pepper Winters plus a BONUS BOOK”