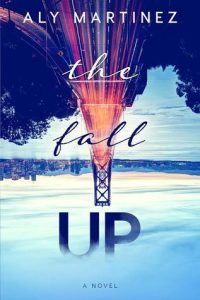 I wanted to jump.
He made me fall.

As a celebrity, I lived in the public eye, but somewhere along the way, I’d lost myself in the spotlight.

Until he found me.

Sam Rivers was a gorgeous, tattooed stranger who saved my life with nothing more than a simple conversation.

But we were both standing on that bridge for a reason the night we met. The secrets of our pasts brought us together—and then tore us apart.

Could we find a reason to hold on as life constantly pulled us down?

Or maybe there’s only one direction to go when two people fall in love at rock bottom—up.

Living life in the limelight can be a blessing and a curse. With her professional career at a high, Levee Williams can’t help but feel her life spiraling out of control. Demands from her performing obligations push her deeper and deeper into placing unrealistic expectations on herself. A weight on Levee’s shoulders that is magnified by the turmoil from her past. Pushing her into an activity that is dangerous and would have repercussions on her career if anyone found out.

Reflecting on the past is nothing new to Sam. For his own reasons, he seeks solace from smoking while looking out over the city from a nearby bridge. The last thing he expected was to discover a female tempting her fate on that bridge. Someone unknown at the time, but who would leave a lasting impression on Sam’s heart.

Night after night, the two tattered souls travel to that bridge to meet again. There reasons as opposite as they can be. One person is there to reflect….the other has the intentions of jumping. Sam is determined to save Levee from a fate that has no return. While the two don’t know a lot about one another, fate will intervene and throw their two worlds together. Something that will alter both of their lives in the most unexpected of ways.

Where do I begin?? Oh I know…..be still my ever loving Sam filled heart!! The Fall Up is an emotional story that pulled me in from the very first chapter. I sat up far into the night …well, actually it was early morning by the time I finished devouring the words upon the pages. Levee and Sam have to deal with some serious pressures in life. How they go about moving on is both engaging and intense.

This romance was anything but ordinary. Word upon word that left me wanting more peeks into their life. There are some humorous moments that only add to the serious subject matter that this book deals with. Creating a romance that definitely mirrors circumstances one would find in today’s world. While there were so many times I wasn’t sure where the story was headed, the ending was a compliment to the plot the author worked so hard to create. A GREAT romance that should be at the top of your to-read list!!