by Lexi Blake
Also by this author: , ,
Also in this series: 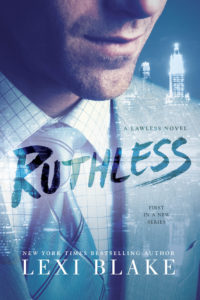 The Lawless siblings are bound by vengeance. Riley, Drew, Brandon, and Mia believe the CEO of StratCast orchestrated their parents’ murder twenty years ago to steal their father’s software program. And there’s only one way Riley can find some solid evidence…

Heir to the StratCast legacy, Ellie Stratton hires a new attorney to handle a delicate business matter—and she’s shocked by her attraction to him. Over the course of a few weeks, Riley becomes her lover, her friend, her everything. But when her life is threatened, Ellie discovers that Riley is more obsessed with settling an old score than in the love she thought they were building. And Riley must choose between a revenge he’s prepared for all his life and the woman he’s sure he can’t live without… 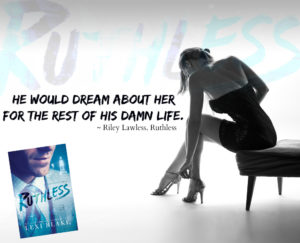 It was the first time she’d spoken without being prompted. “Do what?”

Her face flushed the sweetest pink. The color went all the way down that sexy V-neck. Her breasts flushed as well as her face, and it made his damn dick tighten. “Kiss me. Why did you kiss me like that?”

Oh, so many reasons, but he gave her the most compelling one. “I wanted to.”

The minute she’d opened the door and he’d seen her standing there looking anxious, he’d known how to calm her down. All he’d had to do was put his hands on her and some odd connection flared between the two of them. She hadn’t fought him. He could have gone on kissing her. He’d been the one to pull away.

It was like the minute he walked in, he was the only thing that existed for her. It made him feel ten feet tall, but it also made him want to please her.

It was an unsettling sensation.

Her hands came up, fingers on the sides of the table. “You know what I’m asking. You knew I wasn’t alone. Why did you pretend to be my boyfriend?”

It was easy to see she’d wanted him to wait for her at the restaurant so as to avoid him meeting her sister and ex. When she’d opened the door, he’d immediately known something was wrong. He’d gotten a glimpse of her sister and known Ellie had likely needed a hand. It had to be tough on a woman’s ego to lose even a pathetic excuse of a husband to a younger sister.

“You were alone with your sister who slept with your husband. Excuse me. Ex-husband.”

She shook her head. “At the time, we were definitely married. How did you know he was my ex-husband?”

“He took half your net wealth. I’m your lawyer. At this level, a good lawyer is less legal counsel and more war consultant. I can’t properly perform my duties if I don’t know everything about you, including the fact that you tend to have terrible taste in men.”

She frowned. “I haven’t had a ton of boyfriends. I’m not sure what my taste is.”

He really wanted to understand why she’d married that obvious prick. “What attracted you to him? Because from where I was standing, he looked like a dickwad desperate to be twenty-one again.”

She bit into her bottom lip, her eyes glancing away from him. “He wasn’t always like that. I actually met him when he was twenty-one. He was far more mature then.”

He liked her candor. “You were in college?”

“Last year of undergrad. We dated for two years and then it seemed like it was time to get married. We’d moved back here to Manhattan so I could take my place at StratCast. I thought he was going to go to grad school, but he decided on a different path.”

“What path was that?”

A single brow rose over her right eye. “You don’t know?”

Of course he knew. He knew everything. “Are you referring to your ex-husband’s penchant for swinging for the fences? When it comes to investments, that is.”

It was what he liked to call “idiots who funded ridiculous ideas.” They never wanted a simple profit out of their money. They wanted millions and really fucking fast. They swung for the grand slam when all they needed to do was get on base.

It took a true genius to take a single idea and make millions off it. Drew had.

Her shoulders straightened. “He wanted the easy solution. A get-rich-quick scheme. He wasn’t that way at first. At one point he was very intellectual. It’s what attracted me to him. He was curious about the world and liked to discuss everything from politics to social jus- tice to movies we saw. He changed. I didn’t. In some ways, I blame getting involved with me for what happened to him. He got around my father and real wealth and wanted some of his own. When I met him, he wanted to be a professor. He wanted to teach.”

At least he’d gotten her this far. She was talking. Now he needed to get those shoulders down from around her earlobes. For one moment, for that moment when he’d drawn her into his arms and pressed his mouth to hers, she’d relaxed against him, given over to him. Her body had softened and she’d leaned into him, and if he’d pressed her, he didn’t know what would have happened. She might have continued kissing him, forgetting all about the other people in the room. He could have cupped her breast, her ass. Put his hands anywhere he liked.

She hadn’t given a damn that they hadn’t been alone. All she’d cared about was him. 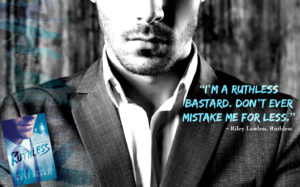 A night that would change the lives of so many. Their future altered by the greed of others. An event to heartbreaking it would fuel their quest for years. Vengeance….it’s the fire that fuels the Lawless family. Shaping who they have become and altering their paths in life. Their need for retribution at the forefront of every decision…every career choice….the ultimate goal a way to ease their souls.

The vengeance the Lawless siblings so desperately seek is finally within sight. StratCast is finally ’breaking’. One of the CEO’s have passed away, leaving his legacy to his daughter Ellie. With some carefully laid plans, Riley becomes the corporate attorney that Ellie hires to handle a company wide buyout. Never in her wildest dreams would Ellie know that Riley has planned this for years.

With her company on the line, Ellie begins to have more than a professional relationship with Riley. Bit by bit he begins to break away her barriers and gain important information related to those responsible for the life altering night for the Lawless family. Nothing could have prepared Riley for the way he responded to Ellie. Slowly realizing that she means more to him that the play-by-play that the Lawless siblings have set their sights on.

Secrets still lie in wait that will shake Ellie and Riley to the core. Causing them to come face to face with their past, present, and a future that neither could have ever predicted. Who will they trust when the truth comes to light? Can their relationship be salvaged or will it crumble in the many fissures that exist within StratCast. Only time will tell who is left standing in the end.

Ruthless has just made its way as a favorite of mine for the year!! The mystery, twists, and romance in Ruthless had me hooked from the very first chapter. There is so much happening that you don’t even realize what is unfolding!! The relationship between Riley and Ellie was definitely hot! However – I am completely drawn to the entire Lawless family. Each adding so much to the dynamic between these siblings. I simply couldn’t get enough!!

Don’t think all of the ‘secrets’ surrounding the siblings quest for revenge will be answered with the conclusion of Ruthless. Nope….this is a mystery that still needs to be revealed. How? Guess you will have to discover the secrets right along with me!! 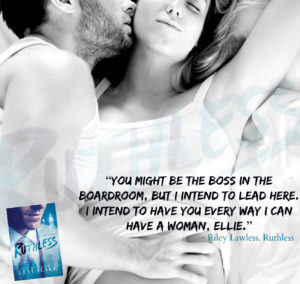