by Katie McGarry
Also by this author: , , 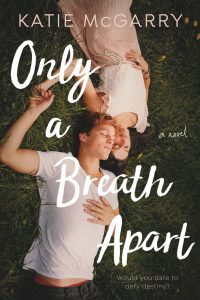 Jesse dreams of working the land that’s been in his family forever. But he’s cursed to lose everything he loves most.

Scarlett is desperate to escape her “charmed” life. But leaving a small town is easier said than done.

Despite their history of heartbreak, when Jesse sees a way they can work together to each get what they want, Scarlett can’t say no.Each midnight meeting between Jesse and Scarlett will push them to confront their secrets and their feelings for each other.

“Gritty and real, Only a Breath Apart is a story of hope conjured from pain, strength drawn from innocence, and love earned from self-respect. Beautiful, poignant, and fierce.”
―Kristen Simmons, critically acclaimed author of the Article 5 series 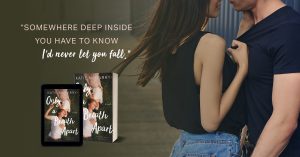 Secrets that lie behind closed doors are often missed by the outside world. For Jesse – the curse that he believes haunts his family keeps love at bay. After losing his mother, Jesse torments himself reliving the moments that brought his mother to that day that forever changed his life. Now the perils of trying to keep the family farm standing weigh on Jesse’s shoulders each and every day.

For Scarlett – control and fear are the driving forces in her life. Every factor in Scarlett’s life revolves around the fear that hovers in her home where her father is concerned. The unpredictability leaves Scarlett and her family walking on egg shells each day. Then there is the over protective and invasive nature that her father interjects into Scarlett’s life. Nothing is off limits for Scarlett’s father. From invading her privacy to having a hand in every personal relationship that exists in Scarlett’s life, her dad just can’t stop trying to have the upper hand in all situations.

Jesse and Scarlett grew up together knowing that their lives were not perfect. Both relied on their friendship to overshadow any despair they may face in life. As they matured, so did the problems they faced in life. Then came the day they no longer were friends. This absence of friendship would be revisited once Jesse’s grandmother passed away. A pivotal time in life that would set the course for an old friendship to rekindle once more.

Time has a way of mending fractured hearts, and Jesse and Scarlett know this pain all too well. Now they find their futures intertwined in a way they would have never predicted. The only question that remains is just how far the two are willing to go to remain in the other’s life now that their friendship has given each of them the strength to face the demons that haunts their lives.

Only A Breath Apart is the journey of two tattered hearts who have lived through a lifetime of hardships. Jesse and Scarlett are childhood friends that find a way back to one another after tragedy once again intervenes in their lives. It’s a story that will hit home for many readers as you follow the journey, but at the same time will give you hope they can work through the hardships and learn to hope once more.

The pain and struggles that Jesse and Scarlett endure will grab you by your heartstrings. What trabspires to lead them through life will captivate you and leave you wondering what will happen next. It’s a story that is relatable to many that will delve into their struggles. While I enjoyed this book, I did find the ending a bit more rushed than I would have liked to encountered. There was so much about the struggles these two endured to make it to the ending in that last third of the book. I just wasn’t satisfied with the summarizing. All in all the book is interesting and relatable. Judge for yourself just how endearing Jesse and Scarlett are in one another’s life. 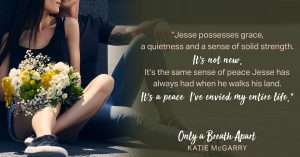 “I thought you said you were meeting Camila.”

I jump at the sound of Dad’s voice and spin in his direction. “I am.”

Dad studies me, and I hide my hands behind my back to conceal the slight quiver that could announce my guilt. When I left him, he was in good spirits, but his moods can quickly shift. There are two patched up holes in my bedroom that can testify to this. Dad replaced the drywall, covered it with fresh paint, but the perfection can’t take away the memory of the way my heart pounded through my chest as he drove his fist through the wall.

He inclines his head toward the booth of balloon animals. “Camila appears to be working.”

“She’s getting off soon,” I say too fast as I bite back the need to ask why he didn’t go home like he said he was.

“Why did you leave us if she’s still working? You said Camila would be done by five-thirty.”

My mouth dries out, and the tremble in my hands travels to the rest of my body, but I force out a cleansing breath. Show no fear. Don’t give him any reason to doubt a thing I say. “She was supposed to be off by now, but her parents asked her to work a few more minutes.”

“If Camila isn’t getting off until later, you should have told me,” There’s a subtle sharpness to his tone that causes hurricane warnings in my brain. “I was showing you a great deal of trust by letting you find Camila on your own.”

“She’s only running a few minutes late. Her parents are watching me so I’m okay.”

Out of the corner of my eye, I glance over and my heart lifts when I notice Camila’s mom watching us. Her stare gives credibility to every falsehood rolling off my tongue. She’s not watching because she thinks I need a babysitter, but probably because she’s mentioned to Camila that she’s perplexed by my father’s strict rules.

I want to peek at him in an attempt to understand my fate, but I don’t. Eye contact doesn’t help when he’s angry. It only makes it worse.

Being in public won’t soothe his temper. He’ll just be more discreet. Like last year when Dad had arrived early to pick me up at a football game and saw me heading to the bathroom by myself. After I had returned to my friends, he called me away with a smile on his face. He had placed a seemingly loving arm around my shoulder, but his fingers dug into my arm as he severely whispered in my ear how I was irresponsible and that it was time to go home.

Dad didn’t cause a scene at the game. The yelling started the moment we were alone in his car and continued until he left me in my room. I stayed on my bed for hours, curled up in a ball and sobbing.

My throat swells as I think of how this will play out. Will it be like Christmas? Will he throw a lamp and force Mom to clean it up as I watch? Or will it be like this past spring and he’ll flip the kitchen table, breaking all the dishes that had been placed there for dinner?

Dad steps closer to me, and I’m filled with dread. “Next time, in a situation like this, you return to me and have Camila text you when she’s done working. I don’t like the idea of you being alone.”

All I want is to be alone, for my thoughts and actions to belong only to me. But he’s not angry, he’s believing me, and I release a breath I had unknowingly held and take the small win. 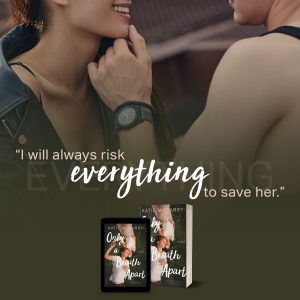