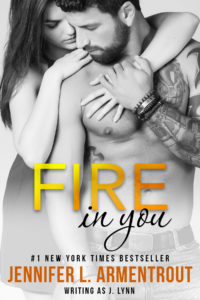 From the # 1 New York Times and International bestselling author comes a richly moving story about heartbreak and guilt, second chances and hope. Full of familiar, fan-favorite characters and no two people more deserving of a happy ending, Fire In You will burn bright beyond the last page…

Jillian Lima’s whole world was destroyed in a span of a few hours. The same night her childhood love, Brock ‘the Beast’ Mitchell, broke her heart, her life was irrevocably altered by the hand of a stranger with a gun.  It takes six years to slowly glue together the shattered pieces of her life, but Jillian is finally ready to stop existing in a past full of pain and regret. She takes a job at her father’s martial arts Academy and she’s going out on her first date since a failed relationship that was more yuck than yum. Jillian is determined to start living.

She just never expected Brock to be a part of her life again. But he’s firmly back in her life before she knows it, and not only is he older, he’s impossibly more handsome, more teasing and more everything. And when he sees Jillian, he’s no longer capable of thinking of her as the little girl who was his shadow growing up or the daughter of the man who gave him a second chance at life. He sees the woman who’d always been there for him, the one person who believed in him no matter what.

Brock knows she’s the one he should’ve made his, and what begins as a tentative friendship quickly turns to red-hot chemistry that sparks a flame that burns brighter than lust. Falling for Brock again risks more than her heart, because when the sorrow-filled and guilt-ridden past resurfaces, and a web of lies threatens to rip them apart, the fallout could lay waste to everything they’ve fought to build together, and destroy the dreams of those they care most about. 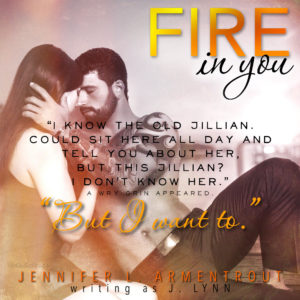 “You’ve got to be fucking kidding me,” I gasped.

Brock’s eyes widened and then he threw back his head, laughing loudly and freely. “Ms. Lima, language.”

My face turned blood red. Did he seriously just say that to me?

Andre’s smile was a bit sly as he eyed the both of us, and I knew—I just knew—he was fully aware of the fact I had no idea Brock was going to be here. Just like my mother had to have known and just like my father had failed to mention.

My family was a bunch of assholes.

“Okay, I’m going to go—uh, pretend to do something,” Andre said.

Brock’s brown eyes were trained on me as he stepped aside and clapped the shorter man on the shoulder.

“Good luck,” Andre said to him, and my hands balled into fists.

The half-grin appeared on Brock’s mouth and he waited until Andre had disappeared. “I don’t think I’ve ever heard you use the word ‘fuck’ before.” His gaze flipped to the ceiling. “Well, there was the one time you tripped over your own feet and banged your knees off the pool deck. Pretty sure you yelled ‘fuck’ then.”

“This is not happening,” I murmured, heart thumping heavily in my chest.

“Actually, I think you yelled ‘fuck’ when your uncle Julio caught you trying to sneak out of the house. You remember that, right? You were trying to follow me—”

“You can stop,” I snapped, “with the walk down Fuck Lane.”

That grin increased, spreading into a full smile that caused my stomach to dip. I placed steadying hands on my desk. “Please tell me I’m dreaming right now.”

“If you were dreaming, I’d hope we’d both have less clothes on.”

“What?” My jaw hit the top of the table. Was he flirting with me? Not entirely surprising. If you looked up “flirt” on the internet, I was sure it had a picture of him grinning the panties right off of some chick, so I guessed a fiancée wasn’t going to change that.

Chuckling, Brock leaned against the door and folded his arms across his broad chest, stretching the material of his white button-down. My gaze dropped. Yep. He was wearing the damn Chucks. “You’re not dreaming, Jillian. I’m the new General Manager and you’re my assistant manager.”

He glanced around, arching a brow. “Is it really that surprising?”

I wanted to scream yes, but I should’ve guessed it the moment I saw Brock Friday night. Anger swept through me. Not only did I feel incredibly stupid for not figuring out Brock was my new boss, I was extremely pissed everyone in my family had basically set me up.

Taking a deep breath, I asked, “Can you give me a second? Please?”

Brock didn’t move for a moment and then he unfolded his arms. “Your wish is my command.”

My fingers curled around the edge of the desk to stop myself from throwing something at him. The moment he stepped out of my office, I hurried to the door and closed it behind him. Storming back to the desk, I pulled my cellphone out of the little slip inside my purse and jabbed my finger on my father’s contact.

He answered on the third ring, his accented voice way too cheery for this time of the morning. “Jillian, my baby girl, are you—”

“Brock is the new General Manager?” I whispered-yelled into the phone.

“You’re at the office already? It’s not even eight-fifteen— Wait, Brock is already there too?” He laughed. “That is surprising.”

“I don’t think you really need to ask that question,” he responded. “Especially when you know the answer to it.”

Closing my eyes, I held the phone so tightly I was surprised it didn’t shatter into a million pieces. “Why didn’t you tell me?”

“Would it have a made a difference?” he asked.

Yes. A thousand times yes, but I didn’t say that. I refused to admit that. “Why didn’t you tell me?”

“You’re going to have to ask him that.” There was a pause. “I didn’t offer you this job because I thought you couldn’t handle working with him or that you would be calling me on your first day, thirty minutes before you should even be there.”

“And I’m not saying that to hurt you, hon. You know that. Hurting you is the last thing I’d ever want to do.” There was another gap of silence while I contemplated knocking the computer off my desk with a ninja kick, and then Dad said, “You can do this.”

Then he hung up on me.

What in the hell? 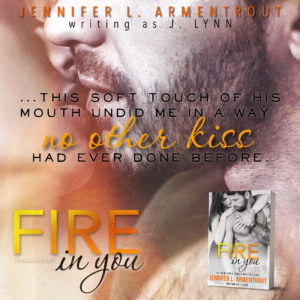 Longing for the person that can’t see you for more than a friend is painful. For Jillian Lima, Brock was the guy she set her site on for so many years. As her father’s prized fighter, Brock could have anyone at his beck and call. Jillian wanted nothing more than to be that shoulder to lean on. The one that Brock desired above all others. Despite so many warning her away, Jillian realizes the hard way that Brock doesn’t see her in the same light that she shines upon him.

They say time can heal all wounds. For Jillian, her wounds are deeper than she could have imagined. After picking up the pieces of her life, Jillian begins to plan for her future. What she couldn’t have predicted was coming face to face with Brock while working at her family’s business.

As the two navigate their working relationship, Jillian finds it hard to stomp all those feelings from the past. They two try to become friends again, but find it hard to do with so much tension brewing. The duo will quickly learn that there are times when old feelings are hard to ignore. Proving to be a fuel that light the fire that both thought died long ago.

Insecurities surround the characters of Fire In You. Jillian and Brock have been thrust into each others life once again. Stirring up old feelings that were buried so many years ago. The raw reality of what happened to Jillian all those years ago provides a barrier between these two old friends. Jillian has finally learned to accept the way that one night of rejection shaped her life, but is now facing the reality that Brock might actually want to be more than friends.

Jennifer L Armentrout has written another great addition to the Wait For You series that explores new friendships, insecurities, and the strength to overcome your fears. For Jillian and Brock it’s the fire that burns within their hearts that leads this couple back to where it all began.

One Response to “Review & Excerpt Tour: Fire In You by J. Lynn plus GIVEAWAY”