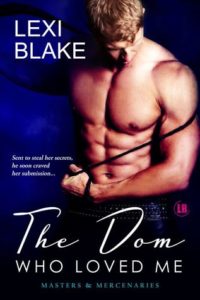 Sean Taggart is hunting a deadly terrorist, and his only lead is the lovely Grace Hawthorne. She’s the executive assistant for an employment agency Sean suspects is a front for illegal activities. To get the truth, he is going to have to get very close to Grace, a task he is all too eager to undertake when he discovers her deliciously submissive nature.

…turns into a dangerous seduction.

Soon, Grace Hawthorne is living a double life. By day, she is the widowed mother of two college-aged sons. By night, she submits to Sean’s every dark desire. She’s living out her wildest fantasies of pleasure—intimate acts of trust she’s only read about. As passion engulfs her, a murderer strikes, and Grace learns that Sean has a deeply hidden agenda. Will Sean choose his mission and break her heart or be the Master of her dreams?

Sometimes life throws us a curve ball. One you never saw coming. For Sean Taggart, his latest assignment should have been a walk in the park. A job like plenty of others requiring him to obtain information through various means for his job. What Sean could have never predicted was meeting Grace Hawthorne.

You never prepare to lose a spouse. For Grace, losing her husband was both unexpected and a blow she never saw coming. Time has passed but the memory of her loss still sprinkles Grace’s life in many ways. Devotion to her grown children and her job takes up most of Grace’s routine. Her loss never quite allowing her to move on with anyone else. Then Sean Taggart walks into her office……

Set with the task of bringing down a spy, Sean is determined to discover every dirty secret Grace and her boss may have. Looking at a picture of Grace hardly prepared Sean for the impact of meeting Grace in person. Grace is nothing like Sean expected, but has managed to pull at his hardened heart. The pleasant charm that is totally Grace leaves Sean doubting the information his security firm has been given. As they spend more time together, the ‘Viking’ soon realizes that the job they are set to carry out will ultimately hurt his future with Grace. What will unfold? Who will be left standing at the end?