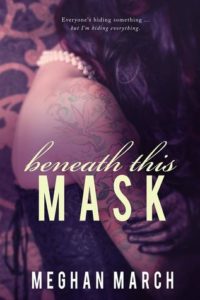 He loves me, and he doesn’t even know my real name.

The limelight that follows him could expose everything I’m hiding. But even knowing the risks, I can’t force myself to stay away.

I’m going to break his heart, but mine will shatter right along with it.

Will we lose it all when I reveal what’s beneath this mask? 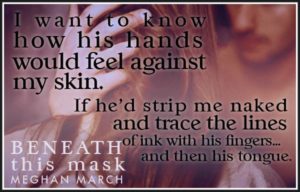 The sins of the Father. A phrase that never held as much meaning for Charlotte Agoston as it does today. Caught up in a trickle down effect, Charlotte is subjected to speculation due to her father’s scheming business deals. A rip off that has bilked millions of dollars from investors, led to her father’s incarceration, and a new life without any of the luxuries that Charlotte once took for granted. Speculation followed Charlotte everywhere she went. Causing Charlotte to flee New York in favor of a place where no one would know about her tainted past.

Armed with color laden hair, piercings, and some new tattoos….Charlie Stone settles into life in New Orleans without drawing the attention of those who would know about her past. With a job in a tattoo shop, Charlie finds that ’casual’ is the only way to keep her relationships. Nothing serious that would jeopardize her secrets. Until Simon Duschesne walks into the shop.

The former Navy pilot has his footsteps turned towards politics. Something that would draw unnecessary attention to Charlie if she allowed their attraction to drift into deeper territory. Simon knows that Charlie has secrets, but doesn’t care as long as they can find a way to be together. Every time Charlie resists, Simon pulls out all the stops. Showing her what a true gentleman is really like. Just as the two decide to give their feelings a chance, the past comes knocking in a way that shatters their worlds. Will the past be too much for either to turn away from?

Why have I waited so long to read Meghan March? Who is to blame for not sharing her amazing books with me before this cultured discovery??? Well …..all I can say is that I am definitely hooked by Meghan’s descriptive writing!

Beneath This Mask changed the roles of the good girl paired with the typical bad boy and gave it a unique modern twist. Simon is a ‘keeper’….a man that truly knows a good thing when he sees it. Charlie has given up so much to stay out of the limelight. This ‘thing’ that she feels for Simon puts all of her secrets in jeopardy. Simon is definitely a true Southern Gentleman that all readers should check out for themselves. Thank goodness I have Con’s story ready to go…….

One Response to “Review: Beneath This Mask by Meghan March”