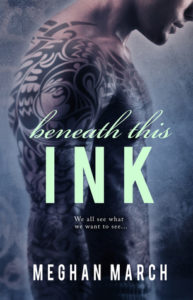 I’ve always known she was too good for me, but that never stopped me from wanting her.

And then I finally had her for one night.

A night I don’t remember.

I figured I’d blown my shot.

But now she’s walked back into my life, and this time, I have the upper hand. I want my second chance.

Will she be able to see the man beneath this ink? 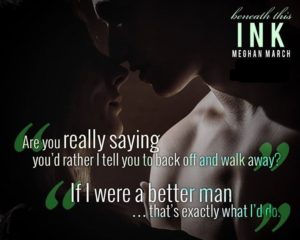 Growing up on the streets can usually mean that your life is sure to be filled with crime and pain. For Constantine, the life he lead during foster care led him straight to the door of every child’s dream. A family that truly wanted to adopt him. Despite his family’s wealth, Constantine was always regarded by those in the neighborhood as ‘that foster kid’. Never worthy of living in their world. Each moment of proving himself another strike against him from those that couldn’t see beyond the wealth that they possessed.

Con had a weakness in this world of riches. A princess in this world of wealth and all of its trappings. Vanessa was the girl from school that Con lusted over for so many years. A dream among the oodles of folks that weren’t willing to extend kindness to an ‘outsider’. Then one drunken filled night, Con’s dream came true. A night with the Princess that had haunted him for years. There was just one problem. Con was too drunk to remember anything about that night. Something that has fueled his desire for a repeat performance.

Now the two are once again thrust into an unusual situation. As the chair of her family’s charity, Vanessa needs Con to help her smooth out a ‘glitch’ with the design of a new building. With the door open on the possibility of keeping Vanessa around longer, Con strikes a deal with the Princess. Three weeks of her time in exchange for the deed to a piece of land that is a thorn in Vanessa’s side.

Old feelings begin to surface between the two, and Vanessa finds herself torn. Con will always be viewed as the outsider. His tattoos, strip club, and tattoo shop make him fodder for the wealthy. Shunning him despite his wealth. Vanessa also knows that the longer she spends time with Con it threatens the very project that holds the key to her future with the board. Remembering each and every detail of their one night together, Vanessa is struggling to find any reason to keep Con at arms length.

With other forces in play, the two will quickly discover that their relationship will unlock mysteries that surround their pasts and their future. Causing them both to question whether an actual romance is even in the cards.

My, my, my…..isn’t Con just full of surprises? What an interesting look into the life of someone from the wrong side of the tracks. This story is full of the hot alpha male going after the woman that captures his attention. The added plot twists keep you speculating on the secrets surrounding Con’s story. Expect the unexpected and you will discover what makes Con a delicious treat that will scorch your reader!!