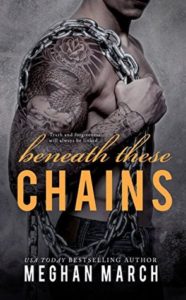 Beneath These Chains is the third book in the Beneath Series, but can be enjoyed as a full-length, standalone romance.

I was raised on the streets, so I know things are rarely as simple as they appear—especially this rich girl showing up at my pawnshop demanding a job. She’s the most tempting thing I’ve ever seen, and I’ll be damned if I can make her leave.

Shit just got complicated … but when it comes to her, I want complicated. We’re both fighting our own demons, and our only chance at a future is to let go of the past.

But will we be strong enough to break free from beneath these chains? 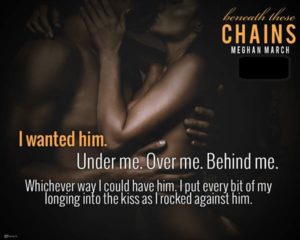 Life on the streets can be tedious and scary. For Lord – it was a way of life. Now he is running a pawn shop that is purchasing from his brother Con. A very successful business that is a far cry from the life he lead before. With his pawn shop a regular hot spot for ‘thugs’ to try and dump their goods, Lord keeps his eyes open and ear to the ground. Everything is the way it should be until a tempting red head comes looking for a job.

Elle knows Lord from her friendship with Charlie. So – the two are certainly far from strangers. However – they are as different in their upbringings as night and day. Elle is the rich girl that is rebelling against her former life. Shaking things up whenever she can. Delighting in the unpredictable, and the results it brings upon her much hated stepfather. So – when Elle decides she NEEDS to work at Chains, Lord finds it harder to turn her away than he imagined.

A mission to save a watch turns into a new ‘claiming’ from Lord. As a mystery surrounding some suspicious events in the neighborhood unfold, Elle and Lord find themselves smack in the middle of it all. Adding to the drama is the decline of Elle’s mother into the bottom of a bottle. The whirlwind surrounding the couple only forces them to face the feelings that are swirling around their attraction. With trouble lurking on the block, Lord and Elle will face hurdles that will threaten their budding romance.

My Lord…..where have you been hiding. Con’s mysterious brother sure knows how to handle his women!! The sarcasm and sexiness that drips from this rugged alpha male is like a siren’s song for Elle. Try as she might, Lord is someone that just can’t be ignored. Both have very strong personalities. Creating a clever mix of desire and attitude that will keep you entertained until the very last page. The Lord and the Lady….a great pair if there every was one!!