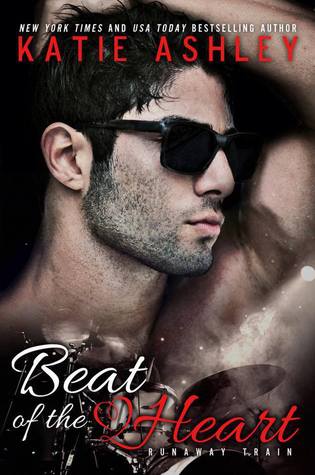 Beat of the Heart by Katie Ashley
Also by this author: Music of the Heart, Music of the Soul,
Published by Createspace Independent Pub on 2013-10-16
Genres: Contemporary, Fiction, Romance
Pages: 458
Goodreads

After years of bad relationships and a cheating ex-fiancé, twenty-eight-year-old Mia Martinelli prefers healing her patients' hearts on the Cardiac Care floor rather than risking having her heart broken again. But that all comes to a screeching halt when caring for the head roadie for Runaway Train puts her into the orbit of drummer and Latin Lover, AJ Resendiz. After a scorching weekend of steamy passion, Mia's intention of getting out with her heart unscathed is challenged by the stud with the wicked sense of humor, especially when he wants to continue seeing her. But when the harsh reality of AJ's hoard of female admirers sends her insecurities into overdrive, Mia bails, leaving him handcuffed to his bathroom shower. AJ never imagined that after two weeks of the best sex and female companionship he'd ever experienced, he would need rescued by his band mates from his shower prison. Although he tries to forget the sensual brunette whose curves made his mouth water, AJ can't get her out of his mind...or his heart. Months later when he finally seeks Mia for answers as to why she left, nothing could prepare him for their life-altering reunion. Can AJ prove to Mia that regardless of the women after his body, his heart belongs only to her?(

As a nurse in Cardiac Care, Mia Martinelli gives her ‘all’ to taking care of her patients. Since her personal life is such a mess, she puts all of her energy into helping those under her care. Frank is no exception. The roadie with Runaway Train is entertaining guests when Mia check in on him. Finding a tray full of food that is certainly not healthy for someone in his condition, Mia attempts to dump the contents in the trash. What she didn’t expect was to end up throwing a drink on AJ Resendiz’s pants. Not thinking twice about it, Mia starts trying to clean off the spot – however, it was in his groin area.

Mia has no idea how famous the members of Runaway Train really are. So – when AJ tries to work his charm on her, she is immune. Each snide comment and rejection at his advances leaves AJ wanting desperately to get Mia in his bed. Reluctantly – Mia agrees to go out with AJ. The two have instant chemistry and find themselves unable to keep their hands off one another.

With a huge amount of baggage on her shoulders, Mia doubts that AJ could ever want someone like her when he has so many groupies at his beck and call. Every time a woman from his past comes to light, Mia goes with her first instinct – which is to run from the relationship. AJ does his best to show Mia that he wants to be with her. Yet, nothing he does seems to get through to her.

When the two decide to take things further with their relationship, a trip to Jake’s farm leads to their unraveling. After all, who expects to find an ex walking in the door with their own key. Mia jumps to conclusions and her mind begins to wander…infuriating her further. After handcuffing AJ to the shower, Mia walks out on him for the final time.

Four months pass without any contact, and AJ decides he can no longer accept the way Mia ended their relationship. After searching her out in the hospital, AJ discovers a secret that Mia has been keeping. A secret that will change his life in more ways than one. Will he walk away for good…leaving his future behind?

Beat of the Heart is the second installment in the Runaway Train series. The relationship between Mia and AJ is full of really steamy moment. Making readers drool for the sexy rock star. I can definitely say that I have found my favorite hottie in the series so far. I mean – what is not to love ?! *Fans self* The crossover characters add another layer to the amazing story Katie Ashley has created!! Each page left me wanting to read more and more. I couldn’t put this one down!!