by Devney Perry
Also by this author: , ,
Also in this series: 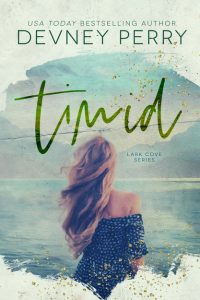 Willa Doon has always been shy. Her quiet demeanor was something she’s always embraced. That is, until Jackson Page moves to town. The one man she desperately wants to take notice struggles to remember her name.

Year after year, Willa stands by, watching as the bartender slash playboy drowns his demons in beer and sex. Then one night, he shows up at her door, suddenly aware that the girl he’s seen around Lark Cove is now a beautiful woman.

Except what he doesn’t remember is that this visit isn’t his first. They spent a night together once before. A night he’s forgotten, thanks to a bottle of tequila.

A night that crushed a timid girl’s heart, and set a broken man on the path to heal them both. 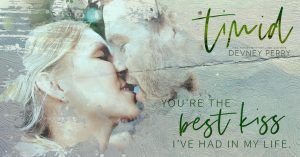 “Good.” That meant we could move on from the whole me-calling-her-by-the-wrong-name thing and get to the days where she wasn’t slamming doors in my face. “Come to the bar and have dinner with me tonight.”

“Was that an invitation or a command?”

I shrugged. “Does it matter?”

She frowned and I knew immediately that wasn’t the right thing to say. Without a word, she marched toward the building between the bunkhouses marked SHOWERS.

“Hey, wait!” I ran after her, but she was walking fast. “What about dinner?”

She didn’t answer. She just kept on marching all the way to the women’s side, disappearing inside without hesitation.

I guess my note hadn’t worked after all.

I debated going inside the showers but didn’t want to terrify a young girl if Willa wasn’t alone. So with a grumble and a kick at the dirt, I went back toward the parking lot.

I didn’t miss Hazel watching from a window in the lodge, laughing her ass off. At least I was entertaining her.

She’d be in for another show soon, because I’d be back again tomorrow. 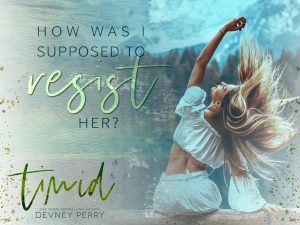 As a long time resident of Lark Cove – Willa knows most everyone in town. With a father that teaches at the local high school, it’s pretty hard to meet a stranger. At the age of 17 – Willa met her ‘dream man’ in the flesh. Jackson Page didn’t know it at the time, but the moment he met Willa in a convenience store wouldn’t be forgotten by her any time soon. In spite of the age difference, Willa dreamed of Jackson from afar. Never having the courage to take their neighborly encounters further.

Now that Willa has returned from college and is running a local summer camp, she can’t help but notice Jackson when their paths cross around town. Always shy and never one to make the first move, Willa finds herself taking solace on the local playground. It’s the one place that no one has ever looked for Willa. Until the night Jackson showed up and shared a little star gazing. The two shared a moment that Willa cherished like no other. Until the next morning….it seems Jackson didn’t remember a thing.

Frustrated and hurt, Willa is determined to let her childhood crush on Jackson come to an end. What she didn’t count on was Jackson’s sudden interest in her life. A stark contrast to the way Jackson has been in the past. What’s a gal to do when her ‘dream’ at romance is knocking on the door?

Timid is the latest book in the Lark Cove series by Devney Perry. Front and center in this book is Jackson’s story. After meeting Jackson in the last book, I really wasn’t sure what we would uncover about his past or present for that matter. What I didn’t expect to find, was a well articulated romance that was endearing and full of intrigue. Jackson’s laid back attitude and Willa’s innocence combined to form a romance that definitely should be at the top of your reading list.

Timid is a fun flirty romance with a bit of intrigue. A romance that will have you falling head over heels for the characters! Perry is known for writing interesting characters that leave your heart full and your soul warmed. Make sure you add Timid to your collection today! 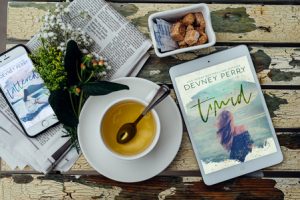