His heart was turned off…

Until she turned him on…

Christopher Moore gave up on the idea of love years ago. Now, his life is an endless string of parties and an even longer string of girls. Enjoying the physical perks with none of the emotional mess, hes convinced everyone that hes satisfied—everyone but himself.

Samantha Schultz has moved on with her life. Finishing her student teaching and living with her boyfriend, shes deluded herself into believing shes content. But there is one boy she never forgot—her first love—and she keeps the memory of him locked up tight. She will never allow any man to break her the way Christopher did.

When Christopher’s sister and her family move into a new neighborhood, Christopher is completely unprepared to find Samantha living at the end of the street. Memories and unspent desires send them on collision course of sex, lies, and lust. But when guilt and fear send Samantha running, Christopher will have to fight for what has always been his. 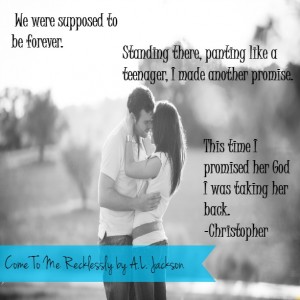 By the waist, he lifted me, pinning me to the wall with the hard planes of his body. I could do nothing but wrap my legs around his hips. He rocked against me, the friction of his jeans igniting that fire, the threat of Ben fueling those flames. He buried his face in my neck as if he didn’t want to see, his bite aggressive as he turned to nip at my jaw, at my chin, moving to my lips. “Told you I wouldn’t let you go. Not ever again.”

His frenzied voice ached with regret.

“Never,” I told him, grinding myself on his erection that was pressed tight between my thighs. I felt desperate to erase the distance Ben had tried to wedge between us.

Christopher seemed even more fractured over it, unable to fathom the idea of what Ben had tried to force on me.

“I just got you back and he’s trying to take you away.”

“Here,”he said as if a demand, tearing at my clothes, overwrought as he rushed to palm every inch of exposed skin. My shoulders were pressed to the wall, my chest heaving with harsh breaths. He pushed up my shirt and dragged off the cups of my bra. My breasts felt heavy and full as he looked on them with a stuttered groan. He splayed his hands across my back, dragging me forward, and his mouth was there, drawing my nipple into his hot mouth, sucking hard before he turned to the other.

I bucked, my hands fists in his hair.

He wrapped an arm low around my waist, his body leaving mine for a fraction of a second, and without setting me down, he dragged my shorts and panties from my legs. Fumbling, he pushed his jeans and underwear down around his thighs.

Without warning, he thrust into me.

I cried out from the perfect invasion. 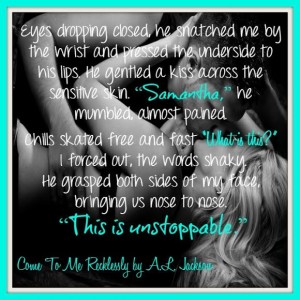 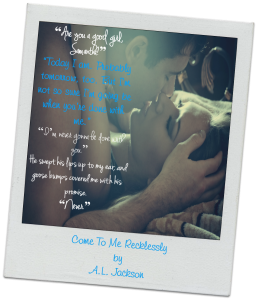