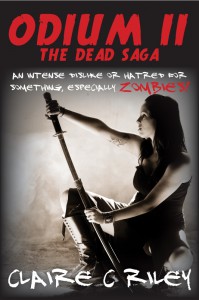 Some secrets are too horrific to ever be forgiven, and some people should never be trusted.
Tortured, starved, and on the run, Nina thinks she’s faced the worst that mankind has to offer, but she’s wrong. She may have survived this long, but she hasn’t come out of it unscathed, and there’s worse to come.

Nina’s trusty Doc Martens are showing signs of the zombie apocalypse, and she isn’t faring much better. With her snarky attitude guaranteed to get her in trouble, Nina needs to forgive the past, to live once more in the present, and learn that sometimes she needs to place her trust in other people.

Because when people are faced with the end of times, they’ll do anything to survive.

Another wonderful author is releasing a book on May 9, 2014.

It can be found at the following websites:

Claire C. Riley, the author of Odium the first book in the “Dead Saga”

which I am currently elbow deep in about a young woman

who finds herself in the middle of a Zombie Apocalypse.

Oh you want more?  Negative, you can read it for yourself :).

I might not give more, but our friend Ms. Fang has reviewed Odium by Claire C. Riley that

will send shivers down your spine and leave you wanting to read it. 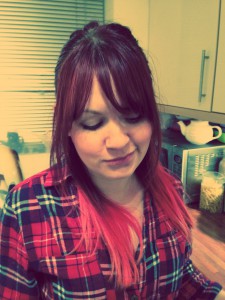 Odium. The Dead Saga is a top #100 dystopian selling book on Amazon.com for 2013, Indie book of the day winner December 2013 and Indie Author Land 50 best self-published books worth reading 2013/14
Limerence featured book in the Guardian newspaper for best Indie novel 2013

Claire C Riley’s work is best described as the modernization of classic, old-school horror. She fuses multi-genre elements to develop storylines that pay homage to cult-classics while still feeling fresh and cutting-edge. She writes characters that are realistic and kills them without mercy.

Claire lives in the UK with her husband, three daughters and one scruffy dog.

She can be stalked at any of the following.