From critically acclaimed author Katie McGarry, comes SAY YOU’LL REMEMBER ME—a story of two people from different worlds pushing themselves, and each other, to get what they deserve! 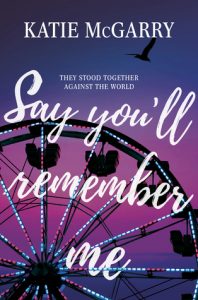 “Doesn’t matter who did it. Not anymore. I did the time. It’s over.”

When Drix was convicted of a crime–one he didn’t commit–he thought his life was over. But opportunity came with the Second Chance Program, the governor’s newest pet project to get delinquents off the streets, rehabilitated and back into society. Drix knows this is his chance to get his life back on track, even if it means being paraded in front of reporters for a while.

Elle knows she lives a life of privilege. As the governor’s daughter, she can open doors with her name alone. But the expectations and pressure to be someone she isn’t may be too much to handle. She wants to follow her own path, whatever that means.

When Drix and Elle meet, their connection is immediate, but so are their problems. Drix is not the type of boy Elle’s parents have in mind for her, and Elle is not the kind of girl who can understand Drix’s messy life.

But sometimes love can breach all barriers.

Fighting against a society that can’t imagine them together, Drix and Elle must push themselves–Drix to confront the truth of the robbery, and Elle to assert her independence–and each other to finally get what they deserve. 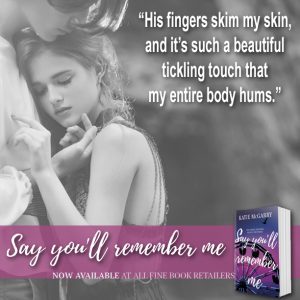 “Everyone says you have a blank slate.” My brother Axle sits beside me on the ground, arms resting on his bent knees, and he stares at the bonfire I built with my own two hands with only flint and sticks. It’s one of the many tricks I learned over the last three months. That and how to survive on my own in the middle of nowhere.

Trees and bears I can handle. It’s not knowing who I can trust, now that I’m home, that’s the problem. Axle knows this. It’s why he’s next to me as our friends and family walk around the backyard for the impromptu “Welcome Home” party I told Axle I didn’t want.

Someone in this yard is the reason why I spent a year away from home for a crime I didn’t commit.

My neck tenses, and I roll it in an attempt to release the anger. It took me close to eight months to find some Zen, and it has taken less than thirty minutes for some of the old underlying rage that followed me around like a black thunderhead to return.

Across from us, two girls I used to go to school with are roasting marshmallows. They’re waiting for me to talk to them. That’s who I was before: the smooth talker, the guy who made girls laugh and caused them to light up with a few specially chosen words. The right smile dropped at the right time, and panties would be shed. But I don’t feel up for conversation and I don’t feel like manipulating anyone anymore.

Crazy—I used to thrive when surrounded by people. The more, the better. But after being in juvenile detention for seven months and spending three in the wilderness taking part in an Outward Bound program for troubled teens, I’m more at ease by myself in front of a fire.

“They’ve all confirmed you’re walking out of all this with sealed records,” Axle continues.

Hel’s leaving out the part of how those records only remain sealed if I uphold my end of the plea deal—the agreement I made with the district attorney after I was arrested. I agreed to plead guilty, and the DA didn’t charge me as an adult and send me to hard-core prison. Considering we had no money for a lawyer to help prove my innocence, the deal sounded like the better of two bad options.

It was rotten luck that got me into this mess, but it happened at the right time. Our governor was searching for screwed-up teens to use for his pilot program. Someone high up in the world thought I stood a chance at turning my life around, but that second chance comes with a price. A price my brother is currently breaking down for me.

“This is a good thing. A blank slate. Not many people get one of those.”

Blank slate. That’s what I’m scared of. I may not have liked parts of the person I was before I was arrested, but at least I knew who I was. This blank slate, this chance to create someone new, scares me. This is a new type of pressure. At least I had a good excuse for being a delinquent before. Now, if I mess up, it’s because I’m truly broke.

The fire crackles then pops, and embers rise into the late May night. My younger sister laughs at the other end of the narrow yard near the aging shotgun house, and the sound is like an eight-eight beat with a high hat cymbal. It’s welcomed, and it’s the first time this feels like home.

She’s sixteen now, grown up faster than I’d prefer, and she’s one of the four people I love more than my own life. She’s also the only reason I’m still out here instead of holed up in my room. According to Axle, it was Holiday’s idea to set up the party.

Old Christmas lights are strung from one towering oak tree to the next, zigzagging green, red and blue across the yard. Most people brought their own chairs and a dish to share. My first meal as a free man and it’s hamburgers, hot dogs and potato salad. I don’t have the heart to tell her I would have given my left ball for a slice of thick crust pizza.

“She missed you,” Axle says, catching my train of sight.

“I missed her, too.” Those are my first words since we pulled in the driveway. I used to be the life of the party, but that was before, and as I said, I don’t know who I am anymore, so for now, I’m quiet.

“I missed you,” he says in such a low tone I barely catch it. “We weren’t the same without you.”

I take a deep breath because I’m not sure any of us will be the same again. 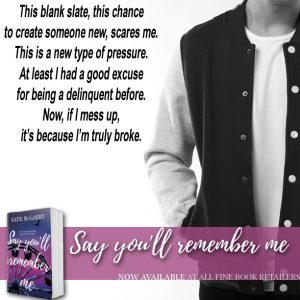 Make Sure You Check Out My Review

Order SAY YOU’LL REMEMBER ME, register and you will receive AND THEY ALL LIVED HAPPILY EVER AFTER, a novella that features your favorite Pushing the Limits and Thunder Road characters!

From the Pushing the Limits series, Noah, Beth, Isaiah, West and Logan are all grown up. Catch up with your favorite characters as one of them finally says, I do.

Pigpen, Eli and Addison from the Thunder Road series: Three separate personalities who still needed to find love…and still had someone important to meet.

This is a limited time offer! So hurry! Registration ends on February 3, 2018!

You must register your preorder to receive AND THEY ALL LIVED HAPPILY EVER AFTER. 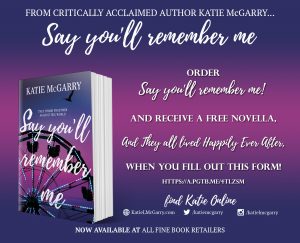