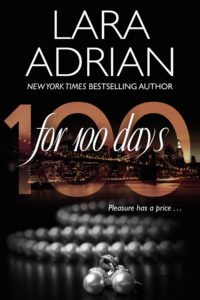 Just when everything in my life is falling apart, I find a chance to turn it around–to step into someone else’s glittering world, if only for a little while. I become someone new, no longer the woman defined by an ugly past, but a woman freer and bolder than myself. A woman who isn’t afraid to explore every passion, even at its darkest, with a mysterious and seductive man who believes my mask is real.

Handsome and commanding, enigmatic and irresistible, billionaire Dominic Baine is an obsession I cannot afford and should not risk. He ushers me into consuming new pleasures and addicting new desires, until the line between my real life and the fantasy one I’ve stolen with him begins to blur.

I know I cannot keep my truth from him. I know my past will not stay buried forever. But before I can make it right, everything comes crashing down. I have deceived this powerful, dangerous man . . . and now there is a price to be paid.

FOR 100 DAYS is the first novel in a passionate new contemporary romance trilogy from New York Times and #1 international bestselling author Lara Adrian. Coming soon: FOR 100 NIGHTS and FOR 100 REASONS. 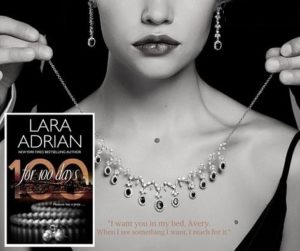 Tasha and I head for the elevators. Neither of the two cars are parked on the ground level, so, as we wait for one to come down, I can’t resist pivoting for another look at the opulence of the lobby.

A moment later, a soft chime sounds behind me as the elevator comes to a rest. I wheel back around and step toward the doors as soon as they slide open.

I don’t even register that the wall I’m facing is human until I’ve almost crashed right into him.

I stop short and lift my head with a half-formed apology on my lips. The sound evaporates on my tongue as I glance up and my gaze collides with a pair of cerulean blue eyes. They skewer me from under the slash of inky black brows.

Brows that are furrowed into a deep scowl at the uncouth clod who nearly body-slammed her way onto the elevator.

No reply from him. Not even a flicker of polite response in his handsome, sharply cut features. Under a crown of dark hair that’s neatly trimmed, fit for a boardroom, but thick with rebellious waves that catch the light in a glossy, raven’s wing sheen, his face is a blending of hard, chiseled angles. With his high cheekbones and square jaw, I’d be tempted to call his face brutal if not for the supple line of his mouth.

And he’s tall and muscular too, dressed in a dark gray track jacket and pants that do little to disguise the physically fit body within. Despite his athletic appearance, I can tell immediately that he’s not some meat-head gym rat who’s more brawn than brain.

No, this man’s eyes blast me with the kind of intelligence and seriousness—a powerful confidence—that I can’t ignore.

A shocking and inexplicable heat pours through me as he holds my gaze. His stare is bold, unflinching, as if he’s accustomed to taking his fill of anything in his sights. That air of assumption should offend me for many reasons, but as his brilliant blue eyes travel the length of me, all I feel is the rapid igniting of every cell in my body.

Tasha clears her throat when my muteness appears to be permanent. “Pardon us, please.”

He barely acknowledges her comment, nor her huff of indignation that follows. No, those piercing eyes staying rooted on me alone. I feel stripped bare under that hard gaze, as if he can see right through me with a single glance and knows I don’t belong here. Even worse, the barely imperceptible twist of his lips seems to say that he’s very much aware of the effect he has on me.

He doesn’t move, then I am mortified to realize it’s because I’m standing in his way.

I wince inwardly and step aside, wishing I would just melt into the crack between the marble floor and the elevator shaft before I embarrass myself any more.

His path cleared, he steps into the lobby without a word.

I follow Tasha into the elevator, but all of my attention is on the dark-haired stranger now prowling across the marble with fluid, almost urgent strides.

I hear Manny greet him as the elevator doors slide shut, blocking my view.

Once we’re sealed inside the car, my breath leaks out of me on a groan.

Tasha arches a brow. “Hot as sin, but obviously a superior prick. Do yourself a favor and steer clear of that one, honey.”

As if I need the warning.

Whoever he is, I doubt I’ll be seeing much of Mr. Baine. In fact, I’m already promising myself I’ll head in the opposite direction if I ever see him in the building again while I’m here. God knows, I don’t need to relive tonight’s awkward semi-introduction with the man anytime soon.

I push the button for the fifth floor, wishing it was as easy to push the memory of those searing blue eyes from my mind.
a Rafflecopter giveaway

LARA ADRIAN is a New York Times and #1 internationally best-selling author, with nearly 4 million books in print worldwide and translations licensed to more than 20 countries. Her books regularly appear in the top spots of all the major bestseller lists including the New York Times, USA Today, Publishers Weekly, Indiebound, Amazon.com, Barnes & Noble, etc. Reviewers have called Lara’s books “addictively readable” (Chicago Tribune), “extraordinary” (Fresh Fiction), and “one of the best on the market” (Romantic Times).

Writing as TINA ST. JOHN, her historical romances have won numerous awards including the National Readers Choice; Romantic Times Magazine Reviewer’s Choice; Booksellers Best; and many others. She was twice named a Finalist in Romance Writers of America’s RITA Awards, for Best Historical Romance (White Lion’s Lady) and Best Paranormal Romance (Heart of the Hunter). More recently, the German translation of Heart of the Hunter debuted on Der Spiegel bestseller list.

With an ancestry stretching back to the Mayflower and the court of King Henry VIII, the author lives with her husband in New England.

One Response to “Release Day Launch: For 100 Days by Lara Adrian plus Giveaway”