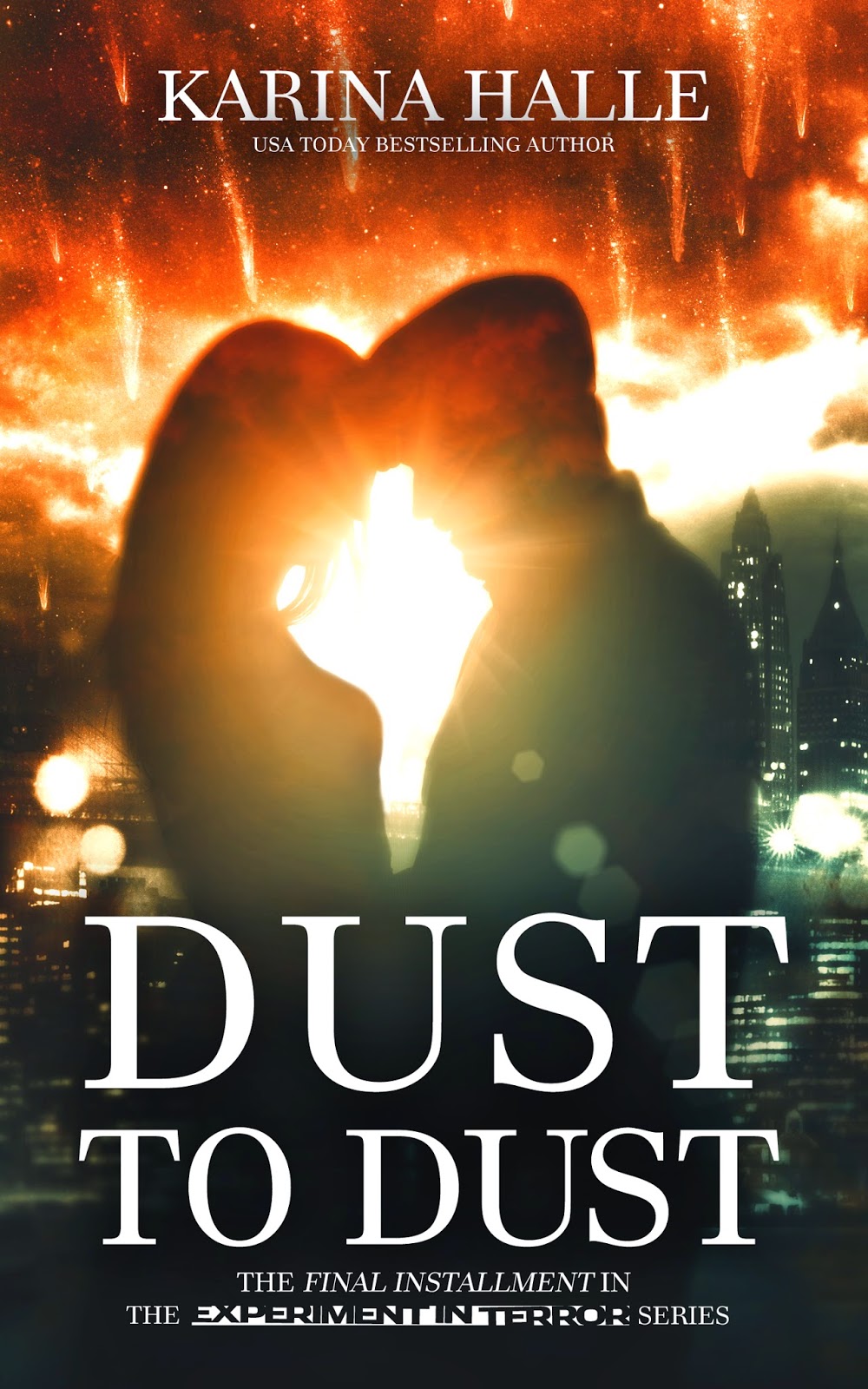 The dramatic conclusion to the Experiment in Terror Series.

On their own, they’re uniquely brilliant. Together, they’re an unstoppable team.

Because after everything the duo has encountered, they haven’t come across an evil quite like this. An evil that has been years in the making, an evil that will stop at nothing until they, and everyone they care for, are destroyed.

Dex and Perry’s love has survived a multitude of sins.

But can it survive the end?

Writing this review is bitter sweet. The Experiment in Terror books were my first introduction to Karina Halle and since then I’ve read everything she ever published, under any name she used. With this being the last in the EIT saga, I feel as though I am saying goodbye to a group of friends that I’ve been with for years. That being said, all good things must come to an end, and I am really glad Halle ended this series before it got to the point where it felt forced and boring. It never even got close to that for me.

Dust to Dust picks up RIGHT at the major cliffhanger we were left with in Ashes to Ashes. If you have NOT read Ashes to Ashes, stop right here. There will be spoilers for it (but none for Dust to Dust)!

Dex is missing and Perry and Ada hop a plane to NY to find him. In true Dex and Perry fashion, nothing is quite as simple as it seems, and nothing goes quite the way they plan. Even if this whole trip were being filmed, no one would believe anyone has this bad of luck anyway.

Halle’s writing is just so … tight and clean (yeah yeah, insert a pervy joke here, we are talking about Dex after all …) My emotions were on a constant swing the whole time, from stress and anxiety, to relief, to waiting for the other shoe to drop, and the next, and the next, to a bit turned on, to laughing, and yes, even some hiccupping sobs and even a few tears. This from a girl who rarely cries. I might have taken a picture as proof. I will neither confirm or deny this.

At the end I was left with a sense of completion. It really was the end of an era, and while I was certainly sad to see the words THE END for the last time at the end of an Experiment in Terror book, I am left with the feeling you get after leaving a friend for what you think might be the last time; sorrow touched with joy that they were in your life at all, no matter how briefly.

Thank you Halle, for giving me, and the world, Dex and Perry, and their journey. Warts and all.

With her USA Today Bestselling The Artists Trilogy published by Grand Central Publishing, numerous foreign publication deals, and self-publishing success with her Experiment in Terror series, Vancouver-born Karina Halle is a true example of the term “Hybrid Author.” Though her books showcase her love of all things dark, sexy and edgy, she’s a closet romantic at heart and strives to give her characters a HEA…whenever possible.

Karina holds a screenwriting degree from Vancouver Film School and a Bachelor of Journalism from TRU. Her travel writing, music reviews/interviews and photography have appeared in publications such as Consequence of Sound, Mxdwn and GoNomad Travel Guides. She currently lives on an island on the coast of British Columbia where she’s preparing for the zombie apocalypse with her fiance and rescue pup.