by Alessandra Torre
Also by this author: Blindfolded Innocence, Masked Innocence,
Also in this series: 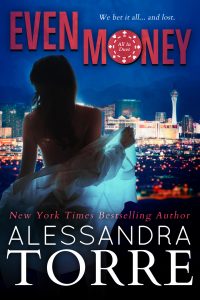 Sometimes it only takes a minute. A connection of eyes across a room, a quickened heartbeat, and everything changes.

I was a cocktail waitress with a fondness for partying and meaningless sex.
He owned half of Vegas, with the reputation to match.

I should have turned away. Instead, I stepped closer.

Then, the lies started.
Rumors spread.
Stalking commenced.
And someone died.

None of it stopped me from falling in love. 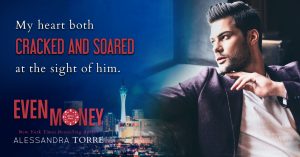 Opportunity doesn’t always lead to better life choices. For Bell – life hasn’t always dealt her the best hand. Until two men with a unique opportunity changed the direction that Bell’s life was headed. The chance to enjoy a better life while hob-knobbing with the rich and famous on the Vegas strip. A life that afforded Bell the ability to distance herself from those she chose, and the means to further her education. A combination that was hard to ignore for even the most star struck individual.

Working as a waitress for The House was always a pleasure. With bosses like Lance and Rick – Bell never had to worry about her safety or the type of clientele that frequented their establishment. Everything was on the up and up. Until the day Dario Capece walked in the doors of The House. An instant punch in the gut that left Bell reeling. What was it about this man? After all, he is certainly unattainable. Something that Bell can’t quite get out of her head. Then how is this one chance meeting pulling at Bell by an invisible thread?

Nothing about Dario is what others expect. Power, stability, and danger roll from his skin. A combination that leaves men scrambling to get out of the way, and women hoping for a quick roll in the chips. Dario knows what he wants in both his business and personal life. Right now – he wants nothing more than to acquire what cannot be obtained. Walking into The House that night changed everything that Dario desires. One woman that is causing the head strong businessman to change the ‘rules’ that he has always lived by.  Dario knows that he should look the other way, but that ‘pull’ he feels towards Bell is hard to ignore.

The stakes are high without the added attention that Dario would bring upon Bell if he pursues her. Nothing is going to stand in the way once Dario makes up his mind. The only problem now is convincing Bell that the risk is worth the gamble.

Even Money is a sordid tale that take us through the underbelly of the Vegas Strip. The seduction that exists in the roll of the dice, the chips on the table, and the cards that land so eloquently at the hands of the dealer…..all of it combines to bring Dario Capece into the world of Sin City.

While I thoroughly enjoyed a romance that wasn’t your typical run of the mill ‘boy meets girl’, I did find a bit of predictability with the plot. Is it the story itself or the fact that I have read every book Alessandra Torre has written? Not sure, but I do know that this has the signature writing style of the author stamped all over this novel. While the suspense was interesting, I figured out the cliffy ending to the first book in the duet pretty early. The ‘clues’ were there in black and white if you paid close attention, and I would have loved the plot to have been a bit more intricate.

The romance between Bell and Dario is not typical either. There is not guy intentionally looking for the girl to complete his world. Dario already has everything his heart could desire……or does he? The relationship between Bell and Dario isn’t exactly ‘believable’ in parts of the novel. Intense…..yes! Interesting…..yes! Just not as realistic as it could have been between the two characters.

With a high stakes game going on behind the scenes, Even Money might just be the antidote to make you say ‘All In’. Lay the cards on the table and watch the action fold before your eyes. 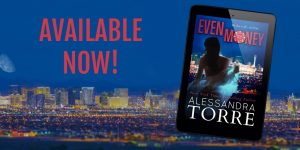 Alessandra Torre is an award-winning New York Times bestselling author of ten novels. Her books focus on romance and suspense, all with a strong undercurrent of sexuality. Torre has been featured in such publications as Elle and Elle UK, co-hosted Dirty Sexy Funny with Jenny McCarthy, as well as guest blogged for the Huffington Post and RT Book Reviews. She is also the Bedroom Blogger for Cosmopolitan.com.