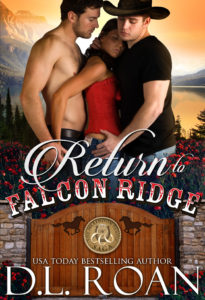 Torn between his first love…and a forbidden attraction he can no longer deny.

Jonah McLendon is no stranger to polyandrous love. Having grown up in a poly family, he didn’t think twice when his high school sweetheart, Chloe, revealed her secret desire for a ménage with his best friend. There was only one problem. He didn’t expect to fall for Pryce, too.

Beaten within an inch of his life after Chloe exposes their secret, and Pryce having been shipped off to a religious boarding school a half state away, Jonah tells the biggest lie of his life and leaves Falcon Ridge with his heart in pieces. When he returns a year and a half later, the last thing he expects to find is his best friend engaged to the girl who betrayed them both.

No longer the scared, confused kid he once was, Jonah is determined to get to the bottom of Pryce’s sham of an engagement, but the truth behind Chloe’s betrayal could change all their lives forever. 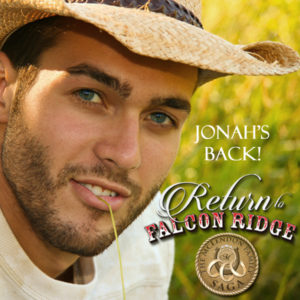 “Where’s your foreman, or the other ranch hands for that matter?” Jonah asked as he bent down and picked up a handful of bolts beside his boot and tossed them onto the workbench. “Why aren’t they out here helping you?”

Pryce furrowed his brows as he doubled his efforts, moving with deliberate purpose, cleaning the dirt from the trailer parts and reorganizing them on the table. “They’re gone,” he said. “Most of them anyway. We can’t pay them, and no one’s going to work for my father for free, except me apparently.”

“What about when the calving starts? You got any help coming?” Pryce couldn’t possibly think he could do everything on his own.

“Our calves aren’t due for another two months, but I’ve got a skeleton crew lined up if I need them.”

“If you need them?” Jonah jerked the part out of Pryce’s hand and took him by the shoulders. “You can’t do this by yourself. Forget the storm. You could lose more than your stock.” One accident and he could lose his life!

“I’ve already lost more than you could possibly imagine,” Pryce said through his gritted teeth.

Jonah fisted his hands into the front of Pryce’s coat and backed him against the side of the horse trailer. All the months he’d spent telling himself he was wrong, that he didn’t want Pryce, that he couldn’t want him, were nothing but wasted time. This need inside him hadn’t gone away just because he did. Every ridiculous excuse he’d meticulously crafted evaporated in a single breath. There was no other truth but the one in front of him, and he was done running from it.

“You didn’t lose me,” Jonah breathed, their faces so close his hat tipped back and fell to the ground behind him.

Pryce’s hot breath coated Jonah’s lips with a teasing taste of him. “But you lost me,” he said and met Jonah’s gaze.

“So it’s true.” Jonah’s angry words sliced through the cold air between them. “You’re marrying Chloe.” Familiar resentment rose to the surface and he didn’t bother to fight it. He pressed his hips against Pryce’s, feeling the hard lie Pryce was about to tell for what it was. Even if he was in love with the traitorous bitch, Pryce couldn’t deny the truth any more than he could. “Did you tell her about us?”

Pryce licked his lips, his body tensing in response to the seductive contact he still so obviously craved, his gaze dropping to Jonah’s mouth. “There is no us,” he breathed. “It was only one kiss.”

“Wrong.” Jonah descended on his mouth, prodding with his tongue until he pushed past Pryce’s lips to claim the boy-turned-man the way he’d craved since the last time their lips touched.

Pryce pushed against his chest with a protesting grunt, but his token resistance subsided when their tongues clashed in a frantic duel. Jonah pressed his weight against him, trapping him against the trailer, countering each of Pryce’s desperate strokes with his own. The long denied need for his best friend’s taste drove him to reach deeper. He gripped Pryce’s face and tipped his head back, their teeth clicking together in their haste for more. Welcomed heat flooded Jonah’s veins as he thrust his tongue alongside Pryce’s as deep as he could reach before retreating and moving in for another drugging taste. Damn, he’d needed this.

Pryce threaded his fingers through his hair and pulled him closer. The vibrant sting to his scalp raced to Jonah’s groin and a growl rumbled through his chest. He ground his cock against the ample bulge in Pryce’s jeans, extracting a mirroring desperate groan from him before Pryce twisted away, gasping for air.

Reluctantly, Jonah backed off, but didn’t release him. He braced his forearm against the trailer beside Pryce’s head, their feverish breaths billowing around them in a cloud of desire and lust.

With a firm grip on Pryce’s chin, he gazed down at him, nowhere near satisfied. “Now there’s two kisses,” Jonah panted. “And you can bet your ass there will be more.” He punctuated his point by trailing his lips along Pryce’s jawline, the seductive feel of his five-o’clock stubble making them both release a shuddering breath.

Pryce shoved him away and Jonah let him go. He hadn’t taken more than a step when Pryce cursed. “Chloe?”

Jonah glanced back at him, then over to the open barn door where Chloe stood frozen, her eyes wide with shock.

“Chloe, it’s not what—dammit wait!” She bolted like a spooked colt and Pryce shot out of the barn after her. “Chloe!” 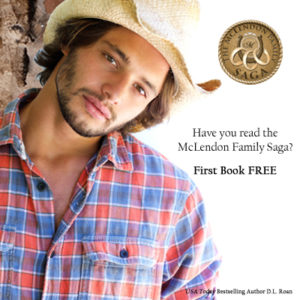 See why Romance Fans are falling in love with The McLendon Family Saga. 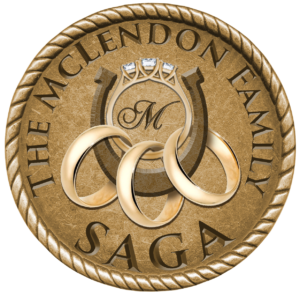 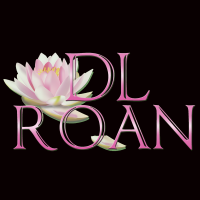 After years of schlepping for the corporate world in an endless rotation of tasteless cube farms and cold coffee, DL Roan decided to give a little attention to the sexy voices inside her head and begin anew. Whether it’s ménage, action-adventure, passion-filled suspense, sexy cowboys, assassins or angels, DL’s novels are sure to keep you on the edge of the page reading long into the night.