Sometimes it takes an outsider to force us to see who we are. The real struggle is accepting what we learn. For Beverly Townsen, nothing could be closer to the truth. Virtually a shut-in, Beverly has pulled back from Green Valley’s community, preferring the isolation of her farmhouse and her daily routine of viewing home improvement television shows. When the opportunity arises for her own home improvement and a personal re-assessment, she’s not so excited about the reality of real life versus DIY programs.

Jedd Flemming understands physical pain and personal loss, but it’s never stopped him from bucking forward in life. A former military man and rodeo star, his life as a nomad comes to an end with false accusations and a family matter back in the Valley. It’s been a long journey to find his way home and once there, there’s nothing he wants more than to reclaim what he’s lost…and maybe the elusive female reclusive who holds a sliver of his past.

With an unprecedented proposition, Beverly finds a stranger living in her barn, raising horses on borrowed pastures, and plowing his way into her vacant heart. Old hurts linger, but sometimes love in deed is louder than words.

‘Love in Deed’ is a full-length contemporary romance. 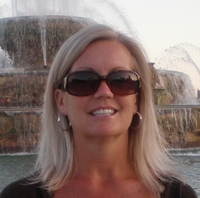