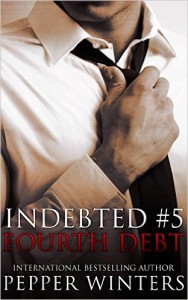 “We’d won. We’d cut through the lies and treachery and promised an alliance that would free us both. But even as we won, we lost. We didn’t see what was coming. We didn’t know we had to plan a resurrection.”

Nila Weaver fell in love. She gifted her entire soul to a man she believed was worthy. And in the process, she destroyed herself. Three debts paid, the fourth only days away. The Debt Inheritance has almost claimed another victim.

Jethro Hawk fell in love. He let down his walls to a woman he believed was his cure. For a moment, he was free. But then he paid the ultimate price.

There is no more love. Only war. Hope is dead. Now, there is only death all around them.

**Only suitable for Dark Romance lovers. 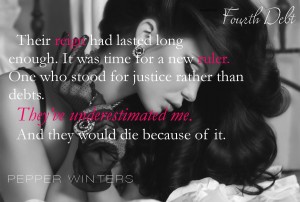 The past few days—that had to be a fucking joke, right?

No logical answer would make sense of what I’d seen, heard, and lived the past seventy-two hours.

My best friend and twin.

This was what she’d been living with? This was how she’d been treated?

This was what she wanted to return to?

Motherfucking why? Why would she ever want to return to this insanity?

We’d been raised in a broken home, chained to an empire that absorbed us right from birth. But we were kept safe, warm, and loved. We grew up together. We shared everything.

But now…I had no fucking clue who my sister was.

But then she came to me.

A woman I never knew existed.

The most stunning creature I’d ever seen.

Only she didn’t come to me on feet or wings of an angel. She rolled into my life and demanded my help.

And for better or for worse…

Daniel cackled like a mad hyena, his fingers stabbing into my bicep. Without breaking his stride, he stole me further away from the parlour and into the bowels of the house.

He can’t be dead!

Just because he lay unmoving and bloody didn’t mean he was gone.

That’s exactly what it means.

I shook my head, dislodging those awful thoughts. He’s alive. He had to be.

I couldn’t tolerate any other answer. I refused to live in a world where evil triumphed over good. That wasn’t right—life couldn’t be that cruel.

It’s always been that way.

My mind filled with images of my mother. My father’s desolation. My broken childhood. Evil had puppeteered us from day one. Why should now be any different?

I swallowed a sob.

I locked my knees, fighting him every step. “Stop!” Looking back the way we’d come, the door to the parlour seemed so far away—a bright beacon at the end of a festering corridor. “They were your brothers, you insane psychopath. Don’t you feel anything?!”

Please let me go to him. He has to be alive…

Let all of this be a nightmare!

I couldn’t cope with Jethro murdered; I’d go clinically insane if they killed V, too.

“I feel relief. I no longer have to put up with their simpering bullshit.” He flashed his teeth. “Cut did us all a favour.”

He was evil incarnate. He deserved to die in excruciatingly painful ways.

I refuse to believe they’re dead.

“I said stop!” I wriggled harder, only succeeding in Daniel’s fingers tearing into my flesh. Goosebumps covered my skin while ice steadily froze my veins. Every second was endless torture. I couldn’t live without Jethro. 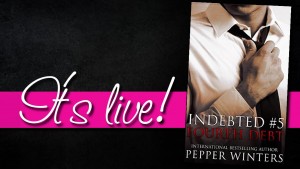 Losing Jethro is almost more than Nila can bare. With her survival instincts kicking in, Nila finds a way to dig deep. Trying to find a way to cope with the torture that is now being inflicted by the remaining Hawk family members.

Revenge fuels each act of torture…each thought of despair. It’s the fire that Nila needs to keep her going. Nothing can stop her from making those that took Jethro from her pay for their sins. Along the way, Nila discovers that things are not always what they seem. Providing a different type of hope through the trials that Nila must endure.

Holy Moses….Pepper Winters has done it again! Writing a story driven by pain, hope, and a love that defies the odds. I had no idea where Nila’s road would lead. Every moment of sorrow, each debt that comes due….it all combined to form another amazing read in this epic series!! Where will Nila’s journey lead?? Will her death be the ultimate debt? There is only one way to find out……discover the Fourth Debt!