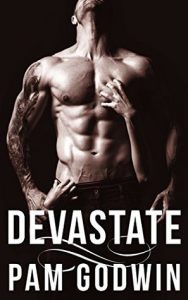 “What is the price you’re willing to pay?”

“I’m not talking about money.”

Tate is on the hunt to find his best friend’s sister.

Eleven years ago, Lucia Dias was abducted. Presumed dead. He never met her, so why does he care?

Some might call his efforts noble, but his motivation is more perverse, bordering on obsession.

When he follows a chilling lead to Venezuela’s Kidnap Alley, what he finds is neither a corpse nor a captive.

Amid poisonous lies and crippling depravity, the price of love is devastation.

With his body, his blood, and her life. 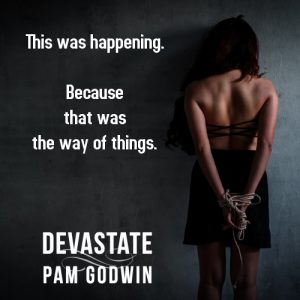 The hunt for Camila’s sister is heating up, and Tate finds himself willing to take on anything to uncover her whereabouts. No one would have expected Lucia to turn up in the slums of Venezuela. A place that is far from ‘friendly’ in appearance or livelihood. Finding Lucia alive and well wasn’t the only surprise Tate would uncover. The circumstances surrounding Lucia’s life were anything but pleasant.

The circumstances that Lucia finds herself in are dangerous and confusing for Tate. While Lucia is not exactly in the slave trade, she is a part of a dark world that puts her actions into question. A dark world that puts anyone’s life in danger just by walking through this neighborhood. Something that Tate knows can go ‘wrong’ really quickly. Determined not to give up on finding Lucia, Tate decides to head to the country that could possibly be the end of his freedom.

Tate and Van head to Venezuela on a mission. One that they could not have seen coming. It’s a dark world that the duo will step into. A recovery operation that will lead them into darkness in ways that neither could have imagined.  Walking away is not an option, but all three will wonder if they will find a way out of this horrid country.

Devastate is the latest novel in the Deliver series by Pam Godwin. The journey in this book does circle back to the dark side of slavery. A topic that has more facets that one could imagine.  Tate and Van will hold your hand through the darkness that is such a huge part of Lucia’s life.  Their journey will include moments that will capture your heart, leave you on the edge of your seat, and guide you through a darkness that will leave you gasping.

There were so many moments that pulled on my heart while Tate and Lucia found room in their hearts for one another. Lucia’s life became such a twisted tunnel of darkness that Van and Tate have now stepped within. Devastate will keep you on the edge of your seat, but not in the way that you think. It’s a soul gripping tale that has left me dying to know what happens next!! 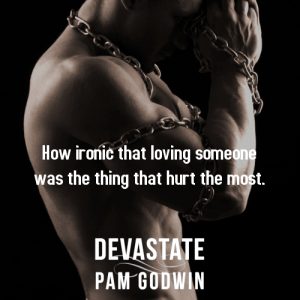 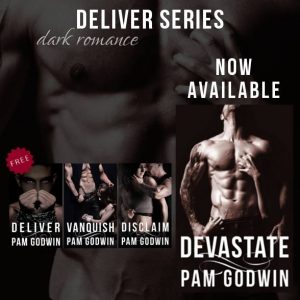 One Response to “Release Blitz: Devastate by Pam Godwin”