There are a lot of things in this world that are easy to escape from. Having a son you didn’t ask for isn’t one of them.

Mack is a nomad. He likes his own space and he struggles with emotion. His past is grey and his future looks about the same. That is until his ex-girlfriend dies and his son is handed over to him. A two month old baby he didn’t know existed. Until now.

His world comes crashing down around him.

Desperate, he hires a nanny.

Jaylah has gotten herself into some serious trouble, so when she sees the job opening for a nanny pop up, she jumps on it. Of course she’s not a nanny, but she figures she can pull it off. I mean, how hard can it be?

She’s thrown into a world of diapers, hourly feedings and a whole lot of laundry. She’s also introduced to the most rugged, gorgeous man she’s ever had the pleasure of meeting.

The worst part, he’s a biker.

Their sexual tension is huge, but he’s a hard nut to crack. She’ll get in, though. She makes it her mission to break through the wall Mack has built so high around himself.

Her world is about to spiral out of control, and she’s taking Mack along for the ride.

“You stole my fuckin’ drugs.”

The foot at my throat presses me further into the cold, scratchy pavement. I gasp, my fingers clawing at fleshy ankles. His skin doesn’t budge; my nails are too short to break the flesh that I’m so desperately scraping at. It does nothing to move him, or send him on his way. Instead, he pushes harder, cutting off more of my air supply.

“That’s not exactly how it went down,” I croak, struggling.

“You were meant to deliver them; instead you fuckin’ sold them, and ran with the money.”

He’s right about that. I did take the drugs and sell them. I had good reason—my boyfriend was in trouble, and I was doing anything I could to get him out of trouble. I didn’t think ahead. I didn’t realize that I’d then owe a very unhappy drug dealer money. Not my finest moment, that’s for damned sure.

He presses his boot down further into my throat, and my air supply narrows down to a dangerous level. My head pounds as the blood and oxygen are cut from my brain.

“I bet that person ain’t here helpin’ you tonight, now, are they?”

No, he’s right about that. Samuel is probably sleeping with someone else. The moment his debt was cleared, he left me. The dirty, cheap fucker left me. Now I’m dealing with the backlash. A furious drug dealer who wants his money.

Money I don’t have.

He glares down at me through angry grey eyes. I squirm again as my vision starts flittering in and out. Shit, I’m going to pass out and he’s probably going to kill me, or worse, drag my helpless body away to do God knows what with.

“If you had money, you wouldn’t have stolen my drugs.”

He stares at me, and for each second he does, my vision swims. Then, much to my relief, he lifts his boot off and reaches down, hurling my weak body up. He pulls me close, so close that our noses touch. My knees wobble and I have to push all my focus into not falling flat on my face and giving him another chance to take me.

“Listen, and listen fuckin’ good. You’ve got two weeks, and trust me, that’s me bein’ fuckin’ generous. Get my money, or I come for you.”

I close my eyes, take a deep, burning breath and nod again. 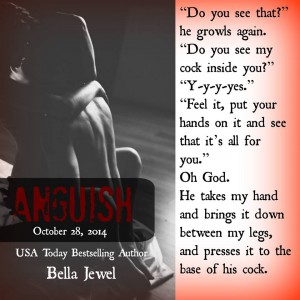 Life on the road is never easy. For Mack, it is part of his life in the Joker’s Wrath MC. A life that affords him the space he needs and the pleasures as well. A Brotherhood among his fellow club members. Mack has never been one to settle down. So – imagine his surprise to discover that the woman he loved and lost has left a part of him behind. A son he never knew existed.

Finding yourself indebted to a drug dealer is a fear no one should experience. For Jaylah, the fear is all too real. Trying to protect her boyfriend, Jaylah took drugs to sell so she could erase his debt. What she gained was a cheating boyfriend and a debt to one of the most notorious dealers around. Desperate to pay the looming debt, Jaylah accepts a job as a nanny that pays extremely well. What she didn’t expect was to land herself smack dab in the middle of the Joker’s Wrath MC!

When Mack hires Jaylah to take care of Diesel, he doesn’t expect a nanny that is no intimidated by his demeanor. Jaylah is in way over her head with this job. With no experience as a nanny, taking care of Diesel is definitely on the ‘learning curve’. Mack’s temper and foul moods does not make the job any easier. However – Jaylah is determined to break through the grit of Mack’s rough exterior. What Mack and Jaylah soon discover is an attraction that neither can ignore. Will they overcome the obstacles standing in their way? Can Mack learn to love again?

Can I tell you how excited I was to dive into Anguish? Let me tell you….I was not disappointed. This journey into the Joker’s Wrath MC is full of twists, turns, and a chemistry that is off the charts sexy! Mack is the MAN!! The relationship between Jaylah and Mack was probably my favorite out of the series. It was explosive, trying, and full of the give and take that most experience when finding that person that completes them. It was an extra ‘treat’ to discover Maddox and Krypt played large parts of this story as well. Bella Jewel has created a realistic and lust-worthy world around the Joker’s Wrath MC. One that I just can’t get enough of. You better believe that I will be counting down the days until the next book!! 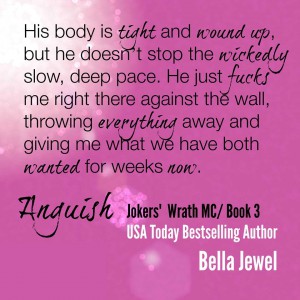 Bella Jewel is an Aussie girl through and through. She spent her life in Western Australia, growing up in many different areas of the state. She now currently lives in Perth with her husband, children and mass amounts of pets. She’s crazy, fun, outgoing and friendly. Writing is her passion, she started at the young age of 18 but finally got the courage up to publish, and her first novel Hell’s Knights was released in August 2013.

Check out more of Bella’s work