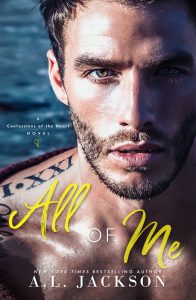 I call myself tenacious.

One of the most powerful attorneys in Charleston, I don’t let anyone or anything stand in my way.

Until a chance encounter changes everything.

It only leaves me wanting more.

But Grace is off limits. Most people would even say forbidden.

Everyone knows an attorney can’t sleep with his client.

Too bad I already did.

And even with the threat of losing everything, I don’t know if I can stop myself from having her again…

All of Me – a Confessions of the Heart forbidden, stand-alone romance 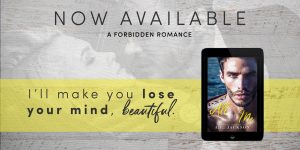 At the top of his game, Ian knows a thing or two about commanding a presence when he walks into a room. The dominant attitude has left a string of one night stands in Ian’s wake, a sign of the view that this self-assured man has on love. The night of that party, Ian was determined to shun anything that wasn’t a necessity that night. What Ian never expected was to run into one woman that would change the course of his life.

A woman on a mission…it’s the best way to describe Grace. With her life in shambles and a ex-husband that is determined to get the upper hand, Grace knows that her plan must produce a silver lining. Meeting Ian was not in that plan, but Grace couldn’t help a moment of weakness when faced with this mountain of self-assurance. What would it hurt to have just one night? Grace knows that her happiness isn’t the focus of the plan, but can’t help taking notice of the way that Ian makes her feel in his presence.

Determined for just one taste, Ian convinces Grace to give in to temptation. What neither could have predicted was the way that short and memorable meeting of the minds would affect the rest of the days to come. Grace was determined to shut the door on things once she walked out of Ian’s bedroom, but Ian couldn’t get the beauty out of his head. Determined to find the woman who is haunting his dreams, Ian sets out to find Grace one way or another.

Ian isn’t prepared for the impact that Grace has on his life. What Grace is looking for is a knight to battle for her through the weight of the storm that was coming. Ian knows if he steps in to be the man Grace is looking for, he will put his entire career on the line. To make matters worse, Ian can’t stop himself from wanting so much more from Grace that either of them ever planned. Will they crash and burn before Ian’s job is complete?

All of Me is everything that you didn’t realize you needed in a romance novel!! The plot of this book revolves around the secret that Grace is holding onto, and just how Ian plays into the equation. As the story began to reveal itself, I found I couldn’t put my reader down. Grace is a modern day Cinderella that doesn’t quite find love in the traditional way. A GREAT addition to the Confessions of the Heart series!! 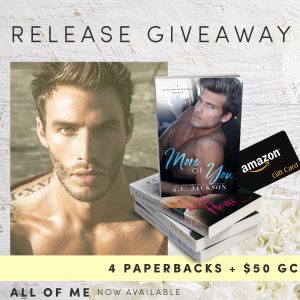 Don’t miss the awesome giveaway for the All of Me release!

I can’t wait for you to fall in love with Ian and Grace’s story the way I did!

One Response to “Release Blitz: All of Me by A.L. Jackson”