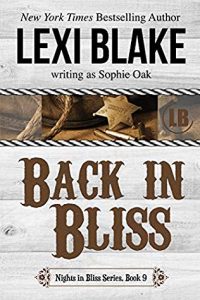 Logan Green is back in Bliss, but only for a few weeks to help out at the sheriff’s office. Everything changes when Seth Stark strolls into town with Georgia Dawson on his arm.

Seth’s arrival is anything but a happy accident. He always dreamed of a big house on the river and a wife he could share with his best friend, Logan. After building a software empire, his only goal has been to make that dream come true. He just needed the perfect woman.

Georgia is still haunted by the dark, troubled man who saved her life. She can’t get Logan out of her head. Her boss brought her to Bliss to help him decorate his new summer home, but when Logan Green walks through the door she discovers Seth has something different in mind.

Seth has a plan for their mutual happily ever after, but he never dreamed that coming home would put all their lives in danger. 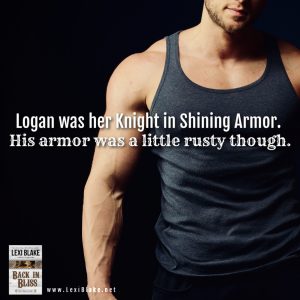 Seth and Logan have known the bond of friendship since the early days of childhood. Like so many others, time led them both in different directions. Their friendship a casualty of the events that unfolded in both of their lives. Now – Logan has returned to his hometown, but isn’t quite ready to face the unfinished business from his past.

Trying to get some sort of resemblance of normalcy in his life, Logan turns to the Dom life and guidance of Julian Lodge. Determined to only reside in Bliss temporarily, Logan is trying to settle the demons that are haunting his past. What Logan wasn’t prepared for was to come face to face with his former best friend. Seth has finally made his way back to Bliss with a companion that will rock Logan to his core. Georgia has always been a handful, but what will happen when she realizes that TWO men hold the key to her happiness?

Once again – Lexi Blake has transported her readers into the amazing world of Bliss and hearts will never be the same. Back in Bliss tackles the long awaited story of Logan, Georgia, and Seth. This trio will heat up the sheets while leading you on a journey that is sure to set your reader on fire. Sometimes a happily-ever-after isn’t in the cards, but Blake works her magic in the latest re-release in the Nights in Bliss, Colorado series. Dive in…..experience the ménage lifestyles that are known to exist within the limits of a little town that knows how to embrace the unexpected.