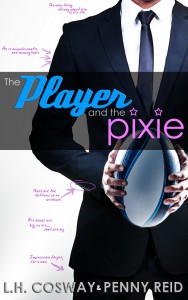 How can someone so smokin’ hot be so bad in bed? I mean, Sean Cassidy is absolute rubbish. RUBBISH. He is the epitome of walking, talking false advertising and I want a refund! Plus he’s an arsehole. So… what is wrong with me that I can’t stop thinking about him?

The Pixie and the Player is a full-length, romantic comedy novel, can be read as a standalone, and is the second book in the Rugby Series.

THE PLAYER
Sean Cassidy is a cold-hearted brute… or so he’s been told. Frequently. By everyone.

His blonde locks, baby blues, and rock hard bod make ladies the world over drool with desire. As the rugby world’s second most infamous player, he should be basking in his success. But Sean has never been content settling for second place, and his frequent confrontations with Lucy’s big brother leave him cold. And when he’s cold, his compulsive little problem lands him in the lap of Lucy Fitzpatrick.

THE PLAN
Sean has a problem only Lucy can solve. Lucy has a problem only Sean can fix. The solution seems obvious: you scratch my back, and I’ll bail you out of jail. But when their business arrangement unexpectedly leaves Sean scorching hot and Lucy on the precipice of inner peace, can they convince the world—and Lucy’s big brother in particular—that this is the real deal? 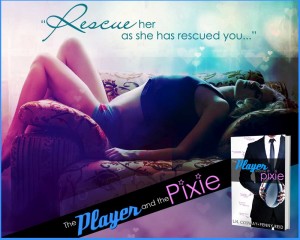 Later that evening, I got ready for the party. My dress was cream lace, sort of floaty, and I wore my hair down with a single daisy clip at the side. I was sitting in a VIP room at the back of the venue with my brother, his fiancée Annie, and a couple of Ronan’s teammates. We were enjoying a few bottles of champagne and discussing the success the Irish squad had enjoyed during the year. Mam was elsewhere, socializing with the other team mothers, and I was glad. I just wanted to enjoy my night without her saying something about how unattractive or embarrassing I was.

We were all having a great time until the door swung open and Mr. Tall, Blond and Up Himself walked in. That would be Sean Cassidy to those not in the know, Sleazy Sean, as nicknamed by the rugby club. I tried to always see the good in people, but he and my brother didn’t have the best relationship. Not only had Sean slept with Brona, Ronan’s ex-girlfriend, but he was also universally acknowledged to be an arsehole.

It went against everything I believed in to say, because I liked to think everyone was redeemable in some way, but Sean just wasn’t a nice person. He actually seemed to be proud about the fact, like he wanted people to dislike him.

The conversation died down, everybody casting surreptitious glances at Sean who swaggered his way up to the private bar and loudly ordered a bottle of bubbly. That’s actually what he called it, but speaking of bubbly . . .

Almost of their own accord, my eyes wandered over his broad shoulders, muscular back, and down to what must have been the most perfect bubble butt I’d ever seen. You know how sometimes male athletes develop those really defined, rounded but masculine derrieres? Well, Sean Cassidy was most definitely rocking one of those, and I couldn’t resist the urge to ogle it. It was pure muscle and simply bite-worthy.

I snickered to myself when I realized I’d almost commented on it out loud. Okay, I’d officially had too many glasses of “bubbly” as Sean so douchebaggedly called it. He must have heard my snicker because his attention landed on me. He stared at me for a second, arched a condescending brow, then dismissed me all in an instant, returning his attention to the bar.

After about thirty seconds everyone went back to their conversations, trying their best to ignore Sean. Ronan had told me once that Sean was the kind of person who thrived on attention, so ignoring his presence was probably the best course of action to take.

It was my own fault I couldn’t stop staring. We’d never spoken before. In fact, I’d only ever seen him from afar at parties like this one, or on television when there was a match on. But right now he was close, close enough for me to realize just how devastatingly and legitimately handsome he was: light blue eyes, a strong jaw, nice lips, attractive nose.

Why were the beautiful ones always such pricks, huh?

He leaned back against the bar, having uncorked the champagne bottle and poured some into a glass. He wore a shit-eating grin as he stared right at Ronan, holding the glass to his lips, his pinky popped. I knew he was getting to Ronan when my brother muttered to Annie under his breath, “Is he fucking shitting me?” 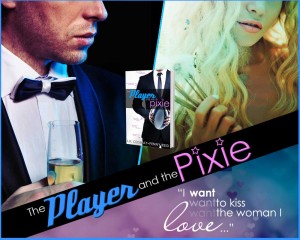 When your brother is a rugby star, your life becomes consumed with the sport. Always living in the shadow of her brother, Lucy is made to feel inferior by their mother. Something that weighs heavy on her mind. As a result – Lucy has developed a little ‘compulsion’ that escapes whenever she is stressed. Despite all her attempts to live in the moment, Lucy can’t quite shake this nagging problem.

As the black sheep of the rugby team in Ireland, Sean receives a lot of flack. His biggest conflict on the team revolves around Ronan – Lucy’s big brother. The two just rub each other the wrong way every time they breathe, speak, or move. Causing conflict to anyone in the way. Lucy and Sean feel the electricity when their paths cross at the after season celebration.

With her mother hounding her, Lucy slips back into her ‘pattern’. Unbeknownst to her, Sean caught the slip of the hand. Armed with this knowledge, Sean blackmails Lucy into a date. Things didn’t work out the way Sean planned, so he headed to a yoga retreat to spend more time with Lucy. The two decide that a little fun between two consenting parties wouldn’t hurt anyone. Lucy quickly discovers that the rough and tough Sean sucks in bed. Can a rainbow haired gal with a wicked compulsion and the jerk that everyone loves to hate have a real romance? Are they destined to fail before things get started?

The Player and the Pixie was an unexpected treat that had me giggling with each chapter. Lucy is such a breath of fresh air. Her desire to be unique makes her such a likeable character. Sean….well, he may have been an asshole but he certainly drew my attention. When Lucy agreed to have sex with Sean…well, I don’t want to spoil things. Trust me…this tale will leaving you smiling at the antics of both characters.

Reid and Cosway make a great writing pair!! Each element that is written into this story is very developed but still holds humor throughout the pages. Hopefully there will be plenty more collaborations from this dynamic duo!! 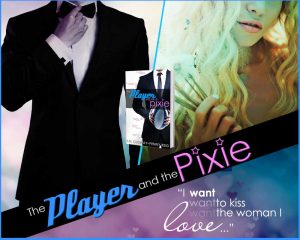 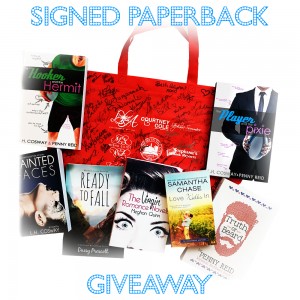 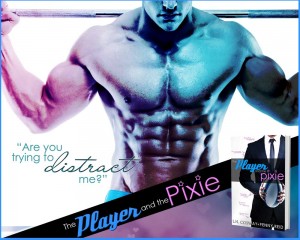