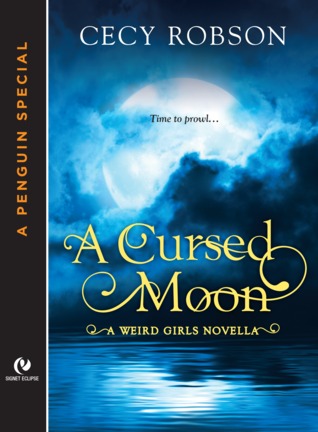 Meet the furry big brother that the Wird sisters never had…

Bren is a cocky, brash hound of a werewolf who loathes the idea of belonging to Aric’s pack—much less finding a mate. But Bren’s hotheaded behavior lands him in the doghouse when he defies Aric’s authority in front of his pack, bringing up a sore subject that’s bound to make the Alpha wolf’s blood boil…

Luckily for him, no one can stay mad at Bren and his wild charm for long. And when some frightening ghosts launch a hostile paranormal takeover, Bren will team up with Celia to take down the evil ghouls before they hurt someone they both love…

Includes a preview of the upcoming Weird Girls novel Cursed by Destiny!

I really enjoyed getting to see this book through Bren’s eyes. I love how supportive and protective of the girls he is. It was also very cool to see the girls from his perspective. Bren is so funny and so fiercely loyal to those in his “pack” and that pack is Danny and the Wird sisters. As usual there is all kinds of action, humor, and sexual innuendos, as well as some very interesting interactions with Mrs. Mancuso. This novella is important to the story line for the next book, Cursed by Destiny. We learn a lot about Bren’s background/story, and how he hasn’t lived an easy life. Both of his parents died when he was young and he has major issues with Aric’s pack because of it. Also another reason to read this before Cursed by Destiny is something big happens at the end and you may go into CbD a little confused. I have a few favorite passages that I’m going to share with you. I recommend reading this after A Cursed Embrace and before Cursed by Destiny.

“From a very, very, very long distance away, another wolf answered my call. For shit’s sake. It’s going to take them forever to get here.”

“A giant wolf stumbled in his haste to round the corner and launched himself upward. He landed in a belly flop between us before scrambling to the foot of the bed. Jesus, I’d never seen such an ungainly lupine.”

Cecy Robson is the New Adult author of
Once Perfect, Once Loved, and Once Pure
and the award-winning author of the Weird
Girls urban fantasy romance series. A self-
proclaimed professional napper, Robson
counts among her talents a jaw-dropping
knowledge of useless trivia, the ability to
make her hair big, and a knack for breaking
into song despite her family’s vehement
protests. A full-time writer, registered nurse,
wife, and mother living in the Great
Northwest, she enjoys spending time with her
family and silencing the yappy characters in
her head by telling their stories.