A Night At the Asylum Review and Giveaway! 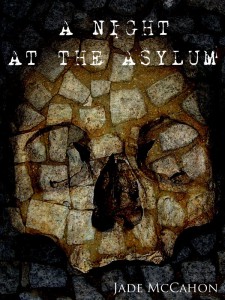 Sara Featherstone is a loser. At twenty she is still indentured to her parents, her best friend is a closet clairvoyant, and her long-time boyfriend has just dumped her and refuses to tell her why. Five years ago her world ended with her brother, Tommy, running his motorcycle into a tree, and the life she might have lived had never started. Catapulted into the dark streets after a “visitation” from Tommy, Sara has no idea that all that wasted time is about to catch up with her. A chance encounter with a man wielding a knife sets in motion a chain of events so bizarre that Sara will soon question everything she has ever believed. From her boyfriend’s fidelity to her best friend’s innocence to what her brother knew about a missing classmate, irony is about to make Sara its bitch, and the next twelve hours could be her last.

This is going to sound weird, but I was meant to read this book. I received a free copy of this book for review purposes, which in no way affects my opinion of this book. I have a list of books that I have promised to review. I generally keep to the order for the most part. For some reason, I picked this book up even though it wasn’t next. Here is why it is weird: The day before I picked up this book, I had just read a book on Astral Projection. The quote on the very first page of this book, even before the acknowledgements, it says:

“I wish that death would bring one long and dreamless sleep. But alas, my experiences have proved conclusively to me that-‘dust thou art and to dust thou returneth’- was not written of the Soul.”

-From The Projection of the Astral Body, by Sylvan Muldoon and Hereward Carrington”.

This was so weird to me because I’ve never read a book that has anything to do with astral projection until the previous book. I consulted a few people, and they all told me if I didn’t read it right away I would upset the balance of the universe and probably cause the apocalypse. Never fear, I had you all in mind, so if the apocalypse does come, it’s not my fault and I refuse to take any responsibility for it!

This book itself is sort of weird, but in a good way. There is all kinds of crazy things going on and you really want to pay attention.

Sara Feathersone is a normal girl. Her brother Tommy died a few years earlier in a motorcycle accident, but life goes on. Her boyfriend broke up with her recently, which sucks, but she’ll get over it. One night after sneaking out of the house, she gets into a bad situation. She is arrested for a crime she didn’t commit. That’s when we find out there is more going on in this town than Sara ever knew. The police force in her town is corrupt with crazy people. Secrets are everywhere, and the only person Sara can trust is Jamie, her friend with the religious freak for a mom.

Sara has weird dreams about her brother. It seems like he is trying to tell her something but she has no idea what. Then she starts dreaming about a girl from her town who went missing not long before her brother died. She’s trying to figure out how the dreams are connected but it seems like everything is just out of her grasp of understanding. What is going on in this town? Will Sara figure out what her dreams mean? Maybe bwahahaha (insert evil laugh here)

This book is well written, the characters are adequately developed, and the world building is pretty good. I enjoyed this book and the story without a doubt. There are plenty of twists and turns to keep the reader engaged and wondering what will happen next, to whom, and what this will mean for that person. You are constantly kept guessing, and I loved that aspect of the book.

This book really is action packed. Jade McCahon’s writing style is awesome. She has a way of building her characters so you know enough to love them (or hate them), but still want to know more about them. I would like to know more about Emmett or Cole. Jamie was a total surprise for me.

The one thing I can say I didn’t like was how much time WASN’T  spent in or at the Asylum. From the title, I got the impression that the majority of the story would take place during a NIGHT at the ASYLUM, when in fact, they are only there for a short time at night, and for a bit of time during the day. It doesn’t take away from the story or the writing, but it was something of a disappointment.

In the end it wasn’t a huge surprise to find out who the “bad guy” was, but in my opinion, that isn’t what the “climax” was about. There were so many aspects to the climax that the revelation of the bad guy wasn’t the point anyway.

I think people of almost any age can enjoy this book. It’s not got an overly complicated storyline, but isn’t so basic you feel like you are reading a middle school book. There isn’t much sexual content, but there is some violence, so be warned of that.

Overall, this book is more creepy than anything else, and I thought it was pretty cool. I’d really like to visit the Asylum in this book if it actually existed. I love spooky things like that.

Jade McCahon is an author, musician, and artist who lives in Lawrence, Kansas, with her husband and three children. She is a Lyme disease activist and has been a ghost “hunter” with the Olathe Society for Paranormal Research and Investigation (OSPRI) since before it was cool enough to be on TV. She is currently working on her second novel.

4 Responses to “A Night At the Asylum Review and Giveaway”